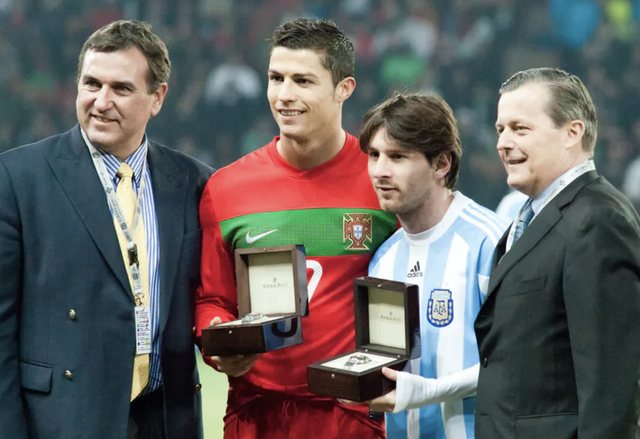 By Antonio Giangreco & Barbara SLAVICH / Football is a people sportornsboth withover4 billion fans, who consider it a passion,and sometimes even a religion. Asfar as quality and traditionkhitstypeof, Europe is considered by manypeoszas the most attractive country for talent, sponsors, investors and fans.

However, not everything that shines is gold. This upward trend has produced an inflationary effect on professional players wages , q h at odds with their colleagues in some professional sports n s US , benefiting from the absence of a threshold t s salary s s .

(measured by num ber t s followers and t h "likes ve " (like) that h has taken every player by fans in their public official Facebook page) , and status t (measured by number of appearances in the team their national) have an impact on the relationship between wages and the players' performance ( the measure of t h of data available of the web W hoscored).

More specifically, the results show that the average performers h n h fush h n type h s , being popular h and having a status of high , leading to higher wages for the same levels of performance. This suggests that to maximize their pay, players can try to increase the profile n and their popularity .

P For example through social media and the press. In fact , popularity does not necessarily depend on the performance of players, but can be determined by their " public " life , which increases their visibility.

Moreover, the high visibility public for these players , can translate into higher incomes for the club (for example through marketing ). Moreover, the results of the study ton s show that the availability of a status of higher , may be " the " protect " some players changes from negative performance of their n n h fush h n Purchased h .

For example: l ojtarët with a s high status ( and who regularly play for their national team) seem to be less exposed to the observation (from fans and journalists).

Once obtained a s status is fixed , it is expected to remain stable, even in the face of declining quality or performance.

So's our tudimi shows that s hpërblimi a player , determined less by performance when he plays regularly for the national team, and m s lot s of status that s he has . This result is particularly important for players at the end of their career, they can expect a drop in their performance, or t h ken h m s little motivation p s r t s play.

They can benefit s h rish a wage t h high , based on the quality of the performance old . Players such as Mid and K ristiano Ronaldo , offer a level of performance and to guarantee their salary level, so that they are famous and have a high status , because they are the player s n s levels up or , although we can expect that in the latter part of their careers, their performances to be less scar h lënëse. /“The Conversation”