Albania ready for the Mediterranean Games "Oran 2022", the national team receives the flag 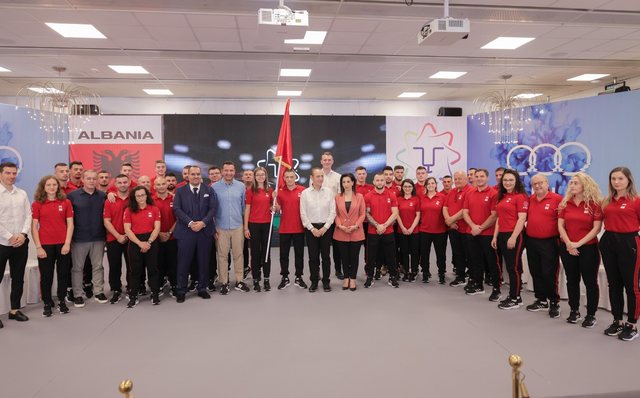 Wishing success to the national team in representing the red and black colors, Veliaj said that athletes are the best diplomats of a country. "I can not wait to get medals, but above all, to leave a good taste, of a civilized, cultured nation, of a team that respects 'fair-play' and represents the best, not only of Tirana, that this year is the European Capital of Youth, but of an Albania which is being modernized. When boys and girls compete for the uniform of Albania, they are ambassadors, diplomats, politicians, spokespersons, the best fans of our nation. I know that most of the time, more than half of our Olympic team I watch with the white and blue colors of the Tirana Club, but I want the red and black colors to go even more, because you represent more than the Tirana club, you represent the Republic of Albania ”,

The Mayor stressed that the changes in the Albanian Olympic Committee have brought a new era for sports teams and a close cooperation with the government and local authorities for the massification of sports.

"Sometimes, in the Balkans, change scares us. But change brings beautiful things, brings new rhythm, new energy, brings new collaborations and a new spirit. Since the change in the NOC, we are seeing success and we are probably living the best days of Olympic sports, of our federations, of the cooperation we have with the government and the respective municipalities. Today we have better funded teams, the prime minister has given perhaps the largest budget ever for community sports and we are all under this healthy pressure from the Olympic Committee. I know that out of over 70 gyms in Tirana, not everyone will wear this uniform or go to the Olympic Games, but I know that thousands of children today in these gyms, have a healthier life ", declared Veliaj.

As the European Youth Capital, the Municipality of Tirana is finalizing a series of projects to improve sports infrastructure. The running track and pools at the Lake are just some of the investments the municipality is working on this time. "We are finishing the track behind the University Corps, a track that, like everything in Albania, created hysteria. Imagine, there are people who dedicate entire shows to tiger teeth at the Zoo. For Luiza Gega's runway at the lake we have not touched any trees, but it is actually an Albanian copy of the Nike runway in Oregon, where the trees are right there. It is fantastic news for Tirana that we got the city pools after 20 years. I know that the Swimming Federation will have the first competition at the end of June, we have organized it for that first competition, but in the meantime we will make an extraordinary investment there ", added Veliaj.

A few days ago, the Albanian Olympic Committee took over the new offices in the Olympic Park "Feti Borova", built by the Municipality of Tirana.

Horoscope for June 30 by Russell Grant