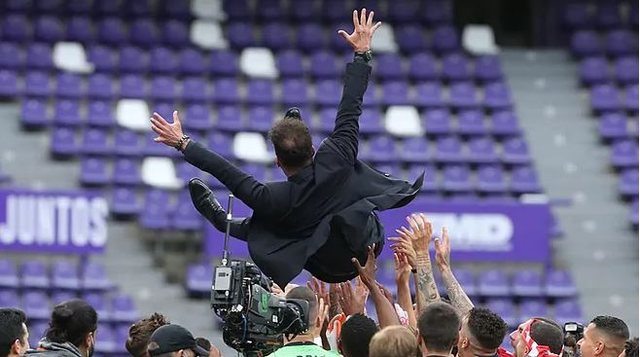 December 19, 2004, Diego Pablo Simeone said goodbye to fans who cheered him on for just four seasons. A short period, but enough for the Argentine midfielder to win the hearts of Atletico Madrid fans.

That day the team played against Deportivo de La Coruna, with 40,000 fans filling the stands of Vicente Calderon.

He got the deserved love of the fans. He was not excited, but he and the forty thousand who accompanied him knew that sooner or later they would meet again. The only thing missing was setting a date for the reunion, but no one doubted that Simeone would one day be the coach of Atletico de Madrid. Atl Madrid president Enrique Cerezo said in his farewell speech: "He had to be fired as he deserves and know that the doors are open."

It was not necessary for El Cholo to knock on the door of Atletico de Madrid. It was from Madrid that he sought her out in December 2011, when things were looking very bad in the sport. The Argentine did not have much to think about, as he already felt with the experience and strength needed to face the challenge. He had coached River Plate, San Lorenzo, Estudiantes and Catania. He was ready to face the challenge.

Cholo Simeone has passed the legend

Nearly 80 coaches have passed on the Atletico de Madrid bench and all have contributed more or less. Among those who have left an indelible mark on the club is undoubtedly Diego Pablo Simeone for obvious reasons. He is the one who has received the most titles (eight) and one of those who has had the most impact on the growth of the club. In addition, he is the coach with the highest percentage of victories, with 59%, surpassing other myths such as Luis Aragones, Ricardo Zamora, Radomir Antic, Max Merkel, Jose Villalonga, Javier Aguirre or Helenio Herrera, writes albeu.com, taken from Marca.

Luis Aragones's profit margin was 50%. El Sabio de Hortaleza continues to be the coach who has led the team most seasons, with 15, although not in a row. He was in four different stages and in the last one turned to the desperate call for help from Atletico de Madrid to get him out of the Second Division well. He had neither the slightest doubt nor the slightest objection to lowering the rank to save his beloved Atletico de Madrid, despite being one of the most prestigious coaches in the country.

In his 15 seasons at the helm of the team, in addition to winning seven titles, he also became the coach with the most matches played, namely 612.

Another name that will be remembered forever is Radomir Antic. Under the Serbian coach's relay, the team reached a historic double (League and King's Cup). A historic moment that no one has reached anymore. Antic spent five seasons at the club, scoring 88 wins in 189 games. For many years, and already with the head coach of Simeone, "we will return, we will return, we will win again, we will be champions again as in '96", he did not stop singing in the stands. More than a song, it was an anthem.

Ricardo Zamora and Helenio Herrera were also important technicians. The first was at the helm of the team for seven seasons and won four titles. The latter managed two leagues and an Eva Duarte Cup in the three seasons he led the team. With both coaches, Atletico achieved 50% victory.

Few of the active coaches who lead the big European teams can boast that they have been on duty as long as Simeone. Jurgen Klopp is in his seventh season at Liverpool, the same season he was previously at Borussia Dortmund. Carlo Ancelotti, now at Real Madrid, was Milan's coach for eight seasons. While Pep Guardiola is in his sixth year at Manchester City. He is on his way to raising myths like Alex Ferguson at Manchester United or Arsene Wenger at Arsenal.