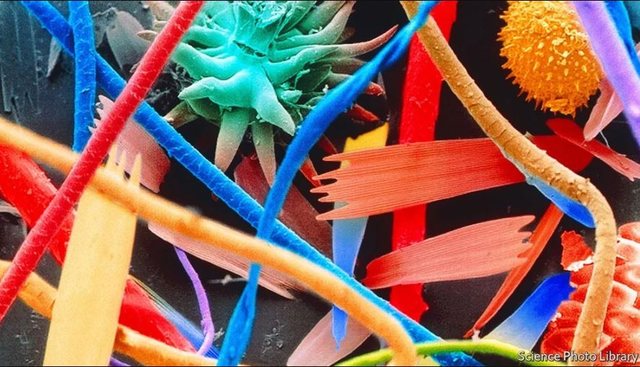 Plastics are man- made materials that are unnatural to this world, but that does not stop the natural world from interacting with them. Indeed, dozens of studies show that when plastic enters the sea, many microorganisms that live in the ocean colonize them aggressively. This can help break down plastic, but these oceanic colonies are also hotbeds of antibiotic-resistant genes. Now, presumably, something similar can happen in the dark corners of your home.

Lei Wang suspected and together with his colleagues at Nankai University in Tianjin, China, set out to gather the necessary evidence. Their search began in an apartment building in Tianjin. The plastics that Dr. Wang was concerned about are small pieces that break away from synthetic fibers, such as polyester and nylon, commonly found in clothing and other textiles. Microplastics then accumulate around the house like dust. He reasoned that if these particles were to be colonized by bacteria, then they too could carry antibiotic-resistant genes.

The researchers selected ten houses in the apartment block, each with only one male tenant. Each apartment had solid floors, instead of a carpet, and a similar layout. One team used sterilized brooms to wipe the bedrooms and collect dust samples as they walked. These samples were then returned to the laboratory and analyzed for microplastics, bacteria, and antibiotic-resistant genes.

As reported in Environmental Science and Technology, 21 types of microplastics were found, the most common being polyester and nylon. Using microbe extracted DNA, they identified 1385 genera of bacteria along with 18 genes associated with antibiotic resistance.

It is not clear why microbes residing in plastics are more likely to carry antibiotic-resistant genes. It is possible that the plastic itself is pushing the bacteria to develop this feature. Researchers suggest, however, that specific groups of bacteria are more likely to be able to make a living from plastic, and these bacteria also happen to be of a type that develops resistance to antibiotics more easily.

To support this argument, Dr. Wang points out that Proteobacteria are also highly resistant to antibiotics and are also commonly found in ocean plastics. Members of the same group were the most common type found among the polyester and nylon fibers contained in apartments as well. This suggests that, just as plastics are changing the nature of bacterial communities at sea, they are also changing those inside homes. How much of a threat it will ultimately be to human health is not known, but it can not do much good to humans.

Here is how Edi Rama answers for Valdrin Pjetri, the former mayor who is looking for a second chance

Veliaj: We will also block the circulation of goods transport vehicles at 07: 00-09: 00

Meta after decreeing the date of the by-elections: No political force is being avoided

Low temperatures are expected, schools are closed for 3 days

5 uses you do not know about hair conditioner

According to the WHO, travel restrictions due to the pandemic are no longer necessary

We never know how much interest we pay on credit or credit cards! Listen to the explanation of Erjon Brace