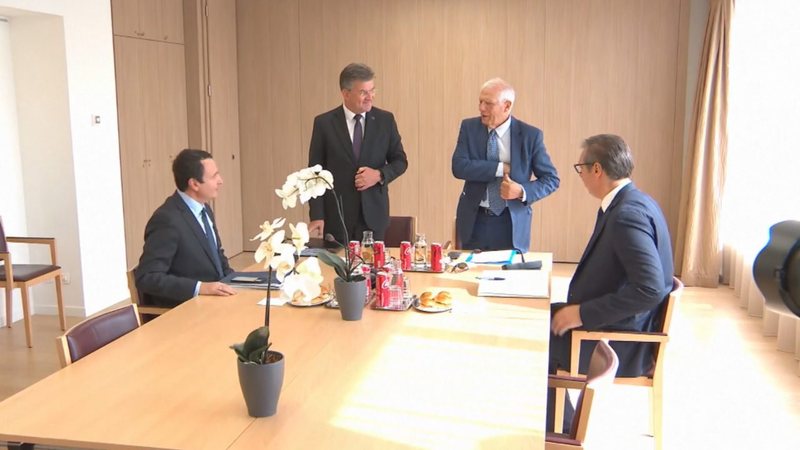 The head of foreign policy of the European Union, Josep Borrell, said that no agreement was reached in today's meeting between the Prime Minister of Kosovo, Albin Kurti and the President of Serbia, Aleksandar Vucic, but both agreed to continue the discussions in the coming days.

"Unfortunately, we still haven't reached an agreement today, no, I'm sorry. But this is not the end of the story as both leaders agreed that the process must continue and discussions will continue in the coming days. There is still time until September 1st. So today there is no agreement, but we do not give up, we must continue discussions, we must seek solutions, the process will continue", said Mr. Borrell.

Today's talks followed the tensions of July 31 in the north of Kosovo where groups of protesters blocked the roads to oppose the decision of the Kosovo government to implement reciprocity for the use of identification documents and car license plates. Western diplomats hoped that today's meeting would ensure the avoidance of tensions on September 1, when the implementation of the government's decisions has been postponed.

Mr. Borrell said that "this is not the moment to raise tensions, it is time to look for solutions and to solve the open issues for a long time. I also told the two leaders that this was a meeting in the form of crisis management, it was not an ordinary meeting. The aim of this meeting was to calm the situation on the ground", he said.

He expressed his conviction that Prime Minister Kurti and President Vucic understood that there is no alternative but talks to resolve open issues.

"Obviously there are clear differences between them in the way they see the final solution of the status of relations between Kosovo and Serbia, but they agreed to continue discussions on a regular basis in the following period of time in order to push the normalization process faster ".

This is the third Kurti-Vucic meeting in Brussels within a year and was called in an effort to ease tensions between the two sides, which followed Serbian reactions to the Kosovo government's decision to implement reciprocity on the use of identification documents and license plates. cars. Throughout the day, the parties have met separately and together with European officials.

"What is important is that we fought for peace, for stability, for compromise solutions," he said.

Serbian media said that Serbian President Vucic has invited a meeting with representatives of Serbs from Kosovo, which will be held on Sunday in Belgrade./VOA