The Albanian MP quotes the verses of the Flag Anthem in the Serbian Parliament: Yes, Albania will live, for it, for us to fight! 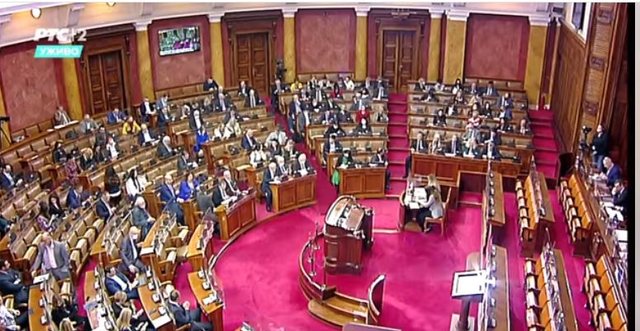 The Albanian MP in the Serbian Parliament, Shaip Kamberi has quoted the verses of the national flag as he demands that the conditions be created for the free and public use of the Albanian national symbols in Serbia.

Kamberi said Albanians in the Presevo Valley have been denied this right at a time when the country aims to integrate into the European Union, adding that if Serbia wants to join the EU it must eliminate discriminatory laws.

"I can only mention here the vandalism against the Albanian state flag, but my essential task in this Assembly is to ask why the Albanians of the Presevo Valley, respectively those living in Serbia, can not freely, publicly and officially use their national symbol. , a symbol that essentially represents a part of their identity. We all believe that we aim to join the European Union. Exactly the Europe we are aiming for is known for its "integration capabilities rather than the destruction or elimination of diversity." if the Republic of Serbia really wants membership), this state must eliminate its discriminatory laws. People are spiritually connected to their identity symbols. People have often, throughout history, even died for those symbols. Therefore, regardless of the current laws, the negative political situation, which denies our symbols, I can say that we will not give up our identity symbols.

We will patiently engage and wait for our identity right to free, public and official use to be realized. We believe in such a solution because this issue in the countries of the region has long been carried out in dialogue with minorities. Until then we will neither surrender nor submit. After all, our unstoppable commitment to identities and symbols is bound to us by the lines of our anthem:

That God Himself said it orally

That nations perish above and,

For him, for us to fight!

Thank you ", said the Albanian deputy in the Serbian parliament.