Tirana schools are the first educational institutions where new dental cabinets have been opened and the oral and eye health control for children aged 6-14 has started.

The Mayor of Tirana, Erion Veliaj and the Minister of Health and Social Protection, Ogerta Manastirliu, were in the 9-year school "Vasil Shanto", to inspect the new dental laboratory and to give some important messages for the health control of children . Veliaj said that this project will be extended to all schools in the capital. "I want to encourage parents not to neglect these checks for their children, to take seriously the recommendation whether to fix a tooth or if to make a correction of eyeglasses. The plan is to go to all schools, but for now we have started with one school in the city center, as an example for others. I am sure from what I saw that the initiative will be a success story ", said Veliaj.

He underlined that in addition to the construction of nurseries, kindergartens and schools, special attention is paid to the health of children. Veliaj added that, in parallel with the equipping of teaching laboratories, the new schools in the capital are also being equipped with dental laboratories.

"If we focus on nurseries and gardens, first to rebuild, reconstruct, insulate, or remove moisture, and then change the food diet, we show that we are building the foundations of tomorrow's society. With the help of the government we are also doing the biggest campaign of building new schools, since the time of Independence. Only in Tirana we have 40 new schools, which not only have new computer cabinets and good sports fields, like here at "Vasil Shanto", but now also with dental cabinets. "So, children not only learn, but they do sports, they learn a course, now they also do eye and tooth check-ups for free", he said. 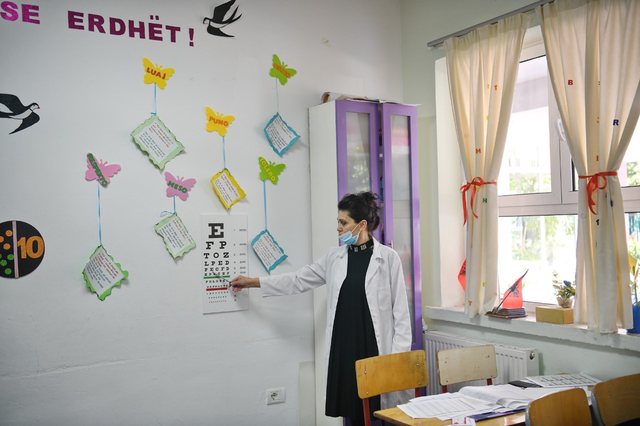 Veliaj stressed that health education at an early age is a good start for a much healthier society in the future.

The Minister of Health, Ogerta Manastirliu said that the launch of two new programs, that of oral care and eye care, will serve not only the health of children, but also their health education. "We have started a very important program, which is being extended to 10 schools in Tirana. We have organized a pilot program for oral care, placing in 10 schools 10 dental cabinets, which will take care of health education, for all the necessary examinations or treatments for children who need even more care. We know very well that through oral care we avoid many diseases. By piloting it in Tirana, we want to extend this model throughout Albania. On the other hand, the Albanian government a few weeks ago, has approved another program, their care program ", said Manastirliu.

The average for the branches of teaching decreases