Brussels Summit: Many jokes no result 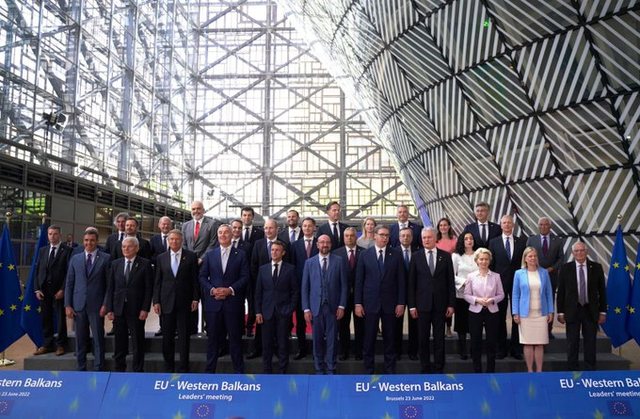 Although there is an overdose with the joke as a tactic when it does not succeed, the summit today in Brussels only produced such. No final result for Albania's future in the EU, even as a result of the blockade that Bulgaria has made on Northern Macedonia.

Here are the developments briefly:

The high-level meeting between the heads of government and states of the 27 member states with the leaders of the Western Balkans awaiting membership ended on Thursday (April 23rd) in Brussels without concrete results. First, the blockade of the opening of negotiations with Albania and Northern Macedonia still continues, as a diplomat in Brussels announced after four hours of talks, according to DË. There has been no rapprochement with Serbia on the issue of EU sanctions against Russia either. Serbia, a country that has opened negotiations with the EU, refuses to impose sanctions on traditionally friendly Russia.

Prime Minister Edi Rama during his speech at the joint conference with Vucic and Kovaceski said: I am sorry for the EU. The EU is unable to release two hostages, Albania and MV, from Bulgaria. Today is a historic day for the worse. They have a very big problem. I think we will get there, that's for sure, hopefully before the next century. We will continue to be in position until they say it is their fault and not ours. I was not expecting anything other than what I got here. No surprises, there was little hope here, I have it written, read on my Twitter not Serbian propaganda.

During his speech, there were also jokes with Vuçi.. Rama addressed Vuçiç at one point, asking him why he was there, as the decision for the negotiations is only for Albania and Northern Macedonia, and the Serbian President replied that they are together and that Serbia supports the European path of both countries.

Rama: The next question, why is Vucic here with you, the decision was expected only for us and RMV?

Vuçiç: There are people here from the West, after the meeting of the two leaders of Albania and Yugoslavia in 1946, it took us 70 years before the leaders of Albania and Serbia met again. Before we met there were words, quarrels all the time, but as you can see we can discuss everything. We can cooperate in the right way. this is not a good thing not for both of us, but for our peoples.

Rama: You can not say that he recruited me and that is why we are working so well because I am a Serbian asset as everyone knows in the Albanian territories.

Vucic: We need to survive the situation and then do the analysis.
Rama: You never answer a Serbian journalist who leaves the room, but you answer a Frenchman. You disappointed me.