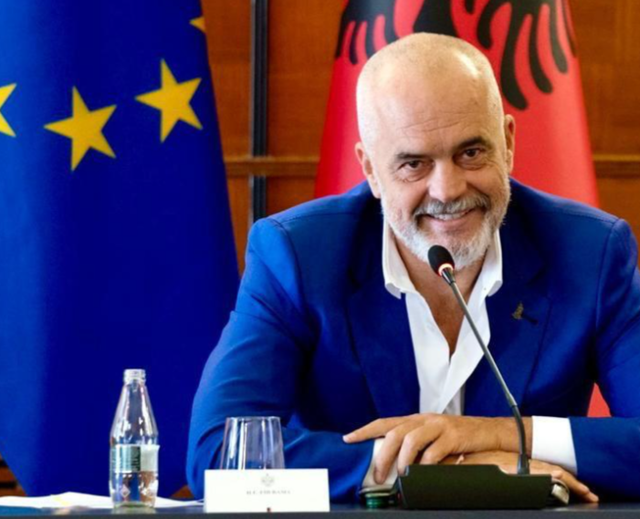 Edi Rama for Der Spiegel answered the journalist's difficult questions, from the unchanged characters of Albanian politics, the Berisha-Meta-Rama trio , to the Serbia-Kosovo relationship, but also Serbia's relationship with Russia , where the prime minister says he understands Vucic for Russian gas.

As for the recognition of Kosovo, he says that he knows that Vu?i? cannot do it, and for this, according to him, Open Balkan (OB) serves, where he does not spare fun with Albin Kurti, who does not become part of this OB table.

In the interview for Der Spiegel, Rama must explain the departure of the Albanians and, in parallel, invites German pensioners to come and live in Albania.

Interview on the following topics:

For the Kosovo-Serbia relationship

DER SPIEGEL: Is there any hope for an agreement on the Kosovo issue?

Edi Rama: Regarding Kosovo, we agreed that we would disagree. I think that Serbia should recognize Kosovo. But Aleksandar Vucic cannot do that. But, at least we can talk about this topic. And we cooperate in projects like the Open Balkans.

DER SPIEGEL: A kind of mini-Schengen between North Macedonia, Albania and Serbia?

Edi Rama: Yes, where all other Balkan countries are also invited. Vucic has thus accepted the border between Albania and Kosovo. A big step forward and a really big political achievement.

DER SPIEGEL: Only Kosovo does not participate. Why is Prime Minister Albin Kurti against the Balkan project?

Edi Rama: Kurti says that the Serbs must first apologize for what they have done to the Albanians. And I say yes, Serbia should apologize. The only question is when? I think forgiveness will come when the dialogue works. Willy Brandt didn't even kneel in 1946. He only knelt in Warsaw in 1970. Our political life can be polarized today, we often can't even agree on the weather here. But when it comes to membership in the European Union, there is absolute consensus.

DER SPIEGEL: Can the trauma of the Yugoslav wars be healed?

Edi Rama: It takes small steps to build a bigger relationship, just like the Germans and the French slowly moved towards complete peace after World War II. Open Balkan is a platform for that and I think my brother Albin Kurti should face the Serbs there. But he lets the opportunity pass. This is unfortunate.

DER SPIEGEL: Like Albania, Serbia is also trying to join the European Union. However, Belgrade continues to buy gas and weapons from Russia. Can such a balancing act succeed in the long run?

Edi Rama: Serbia follows the tradition of non-aligned communist Yugoslavia's foreign policy, it wants to be welcomed all over the world, in Washington and Brussels, in Beijing and Moscow. When it comes to Russian gas, I have to say the Serbs are in good company!

DER SPIEGEL: Where did the unity come from?

Edi Rama: Our entire history has been shaped by regimes and empires that we did not choose, by the Ottomans, communists, kingdoms, totalitarian systems. We have always been obliged. The EU means a free choice for the first time.

DER SPIEGEL: Albanian politics has always been made up of the same names since the beginning of the 1990s: your predecessor Sali Berisha, former president Ilir Meta and Edi Rama. Have you been in power for a long time?

Edi Rama: I have not been in state politics as much as the other two, but now we have a whole new generation in parliament and a cabinet with the highest percentage of women in the UN table. This is actually quite progressive.

DER SPIEGEL: You often say that women are the best. What brings you to this belief?

Edi Rama: I am really convinced of this. If you ask a man to do a certain project, he usually says yes, but often nothing happens. With a woman it is the opposite. She hesitates at first, but once the project is decided, she carries it out with confidence.

For the departure of young people

Edi Rama: How can I stop them as the government of a developing country, when the most developed country in Europe is only an hour and a half away? 50,000 Portuguese leave their country every year, 500,000 Croats have left their country since the country joined the EU.

DER SPIEGEL: People are also fleeing because the state has offered them nothing. Even a visit to the doctor must be secured with a bribe. Can't eliminate it?

Edi Rama: Our administration is already completely digitized to make corruption impossible. Please record such progress as well! An entrenched system is hard to break. Embrace seatbelt free driving. In Germany, an Albanian gets into a car and of course fastens his seat belt. Why? Because there is a law that no one opposes.

DER SPIEGEL: In a country with a population of only 2.8 million, this war must be won with little willpower, right?

Edi Rama: Albania is one of the safest countries in the world. Our crime rate is better than the UK, Greece or Italy and of course the US, with one of the lowest homicide rates in Europe. The tourism industry needs to invest because the nature and the coasts are breathtaking. And German retirees should come here to spend their old age by the sea. According to an old saying, "the home of an Albanian belongs to God and a friend".

Municipality of Tirana agreement with BEI for the social housing program

25 Times Hollywood Made Movies That Were Too Similar