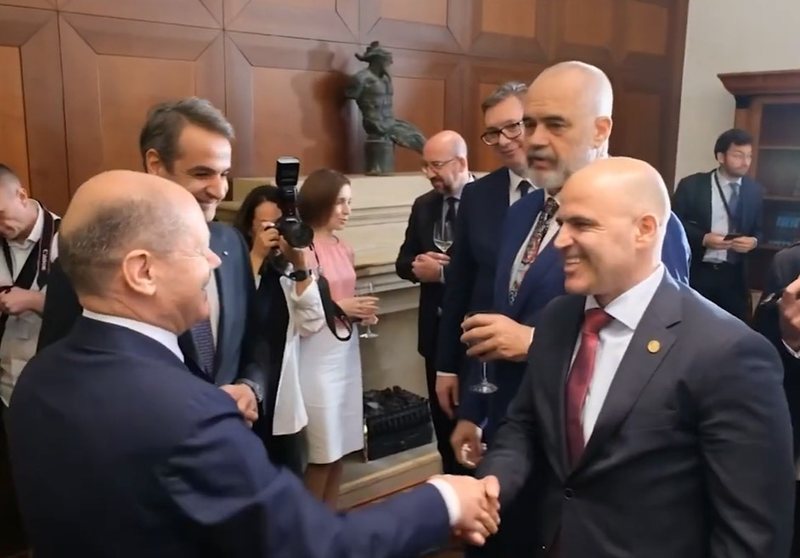 It was this video during the working dinner at the Thessaloniki Summit between Balkan leaders and with the participation of German Chancellor Scholz, which provoked a stream of reactions from Macedonian politics, mainly the opposition there, which went so far as to demand the resignation of the Prime Minister. of Northern Macedonia, Dimitar Kovacevski.

Although the irony of Prime Minister Edi Rama is clear, who jokingly "introduces" Chancellor Scholz Kovacevski as the Prime Minister of "the future Western Bulgaria", implying the Bulgarian veto on the membership of Northern Macedonia in the EU, the opposition factor in Skopje called this joke "humiliation" and "violation of the dignity" of the Macedonian nation.

The reactions were the harshest:

VMRO-DPMNE leader Vlado Misajlovski: "Dimitar Kovacevski does not defend, but sells the identity and Macedonia. "Another speaks in front of the cameras, and behind them we see how he laughs and approves of being called Western Bulgaria," said Misajlovski, who demanded the resignation and apology of Prime Minister Dimitar Kovacevski.

The President of OBRM-PDUKM, Hristijan Mickoski: “You either have dignity or you do not have it at all. When you do not have it, then swearing and humiliation look ridiculous! However, not for the people! Stop the humiliations of the state, the irresponsibility and the robbery of the people. Is Excessive!" - wrote Mickoski, after which he called for a big protest on June 18 in front of the Government.

The Mayor of Kumanovo, Maksim Dimitrievski: “Nobody respects you if you do not show respect for yourself, but also return respect for those who respect you. Rama's "joke" is unacceptable, he owes it to the Prime Minister and the entire Macedonian public to apologize. Instead of smiling, Kovacevski should reciprocate and apologize. Silence is more than a shame! Is that how you think about building an Open Balkans? ” - wrote Dimitrievski.

"VMRO-DPMNE tried to distort an ironic statement by the Prime Minister of Albania, whose sarcasm is already known in the public and has to do with the blockade of Bulgaria and the behavior towards the EU enlargement process. "Rama's sarcasm and irony are public and well-known, but they have never been directed at our country, on the contrary," says SDSM.

"To laugh and to cry"

After all these reactions that have been boiling in the Macedonian media for 2 days, and not only came the explanation of the Prime Minister Edi Rama.

"To laugh and cry the hysteria of some in Skopje towards Prime Minister Kovacevski, after the publication of the video of the handshake with Chancellor Scholz in Thessaloniki, where I ironized the ugly blockade of Northern Macedonia by Bulgaria! "Mejhane quarrel between the meatball smoke," Rama writes