From Tik-Tok, to the power of Bibi Netanyahu and the stunningness of Hamas! Some backstage in the analysis of Thomas L. Friedman 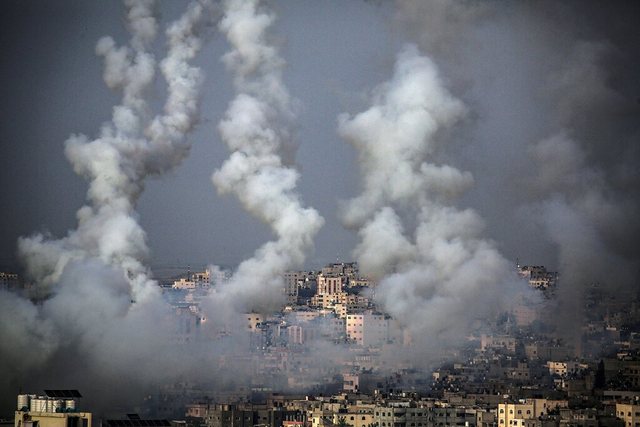 What happens when TikTok is used as a tool to express Palestinian concerns about land grabbing in the Arab neighborhoods of Jerusalem by right-wing Israelis? And then if you add that these concerns coincide with the holiest night of Muslim prayers in Jerusalem? Add to that the most emotionally charged holiday for the Israelites coming next month in the same city? And at the same time Hamas' attempts to take control of the entire Palestinian cause? And finally imagine the combination of all these factors with a political vacuum created in the Palestinian Authority that can not hold legitimate elections and Israel that has just emerged from the elections and is still divided by them, because a government has not been formed. ?

What is happening is the outbreak of violence around Jerusalem that began last Monday in Gaza and made people naturally ask: Is this the big one at all? Is this the beginning of the Palestinian revolt?

The Israeli government, the Arab states that surround it, and the Palestinian Authority all desperately want the answer to this question to be "no." Israel wants the answer to be "no" because it knows there will be little support from the left-wing White House in the event of a major offensive against the Palestinians. The Arab governments want the answer to be "no" because most of them want to do business with Israel's "high-tech" companies and not interfere with the protection of Palestinian rocket launchers. The Palestinian Authority itself does not want the revolt because it would highlight how little this authority has control over the roads of Palestine.

But unlike the revolts that started in 1987 and 2000, when Israel had to seek international help to put them out, there will be no Palestine on the other end of the phone this time ... or if there will be, it will be a 15-year-old on his smartphone giving orders and inspiring people from TikTok, the video app often used by Palestinian youth to challenge the authorities and foment confrontations with Israelis.

Jack Khoury, an expert on the Arab dynamics of the conflict, wrote in an analysis published in Haaretz that the Palestinian side of the conflict is driven by "popular masses" which consist mainly of young people who do not expect political leadership or authority. "Neither Palestinian nor Arab leaders in Israel or the Gaza Strip." In recent days it has been reported that Hamas is trying to incite protests, but the Hamas leadership has no control over the course of events. This fact is also seen by the Israeli government, which knows that it has nowhere to turn and no one to address to negotiate an escalation of the situation.

But what created this movement? The coincidence of clashes between religious celebrations and holy lands, according to religion philosopher Moshe Halbertal, along with several political actors who threw gasoline on the fire, created this "destructive cocktail".

Specifically, on Jerusalem Day, a national holiday commemorating the establishment of Israeli control in the eastern part of Jerusalem, in the Old City and the Holy Temple, at the end of the 6-day Arab-Israeli war, thus uniting the western and eastern parts. of the city. This day is commemorated with prayers at the West Wall that begins Sunday evening.

This holy Israeli date coincides more or less with the night of Qadr, which this year was Saturday. This is considered not only the holiest evening of the month of Ramadan, but of the entire Islamic calendar year. This night is celebrated in remembrance of the recitation of the first verses of the Qur'an by the Prophet Muhammad, to whom the word of God was recited by the angel Gabriel, and where thousands of Muslims gather in the Aqsa Mosque near the Western Wall and the Mount Temple.

This coincidence of sacred dates led to inevitable clashes in the alleys of East Jerusalem and culminated on Monday with Israeli police raiding the Aqsa Mosque, where Muslims had gathered piles of stones to throw at Jewish security forces. Hundreds of Palestinians and 20 Israeli police were injured in the clashes.

The situation was escalated by the claims of both parties for full control over their sacred lands. Right-wing Israelis had received a court order to expropriate six Palestinian families living on Jewish-owned land in East Jerusalem since 1948, when the city was divided. Palestinian families have appealed the decision and the Supreme Court was expected to give its verdict on Monday regarding the fate of these families, whether they would be evicted by their family or not. The decision was postponed due to violence.

The clashes between the shrines and the sacred dates, as explained, were explosive enough, but gasoline was thrown into the fire by TikTok footage. In April, a group of Palestinian youths posted on TikTok a short video where they appeared attacking an Orthodox Jew on public transport, as an incentive for others to do the same. In response to the video, a far-right Jewish group called the Lehava marched on Jerusalem shouting "Arabs out."

The whole conflict may seem like an unresolved tangle. What does this conflict tell us?

The most obvious and important message is that a dangerously naive consensus has been created over recent years in Israel, where it is claimed that the spirit of revolt has been suppressed and the Arabs of East Jerusalem have accepted life under Jewish rule. This consensus was so strong that in the last four elections, the issue of peace with Palestine, how it can be achieved and what happens if ignored, was not even on the agenda.

The "Abraham Accords" drafted by the Trump administration, which normalized relations between Israel and the United Arab Emirates, Bahrain, Sudan and Morocco, while helping to stabilize the region as a whole, gave the impression that the Palestinian cause was a thing of the past. The events of these days showed how wrong this logic was.

The Biden administration does not appear to be interested in responding immediately to events and media coverage of the conflict. She does not believe the conditions are right for any progress on the Israeli-Palestinian issue, and the last thing she wants (in the context of negotiating Iran's nuclear disarmament) is to focus on Israeli-Palestinian ceasefire negotiations. could help Iran in its attempt to worsen the situation.

What should be done from now on?

This depends in part on Benjamin Netanyahu. All the unfortunate coincidences that have happened at the moment, are even more dangerous as after 12 years Netanyahu may be in his last days in the post of prime minister. Netanyahu has a vested interest in the failure of his allies to form a new government that would mean his ouster. He would like Israel to go to the fifth snap elections giving it a chance to stay in power and avoid jail in case the trial against him, where allegations of corruption weigh on him, finds him guilty. One way to achieve this is for Netanyahu to throw gasoline on the fire until his right-wing opponents give up trying to replace him and support him.

A large part of the responsibility also falls on Hamas. Hamas has failed to establish economic growth in the Gaza Strip and has made no progress in its relations with Israel. The fact that the Palestinian Authority postponed the planned elections that would probably remove Hamas from power is an indication of a lack of progress.

What does Hamas do when it is in a difficult position? Throws missiles at Israel. But on Monday Hamas did something unusual. It fired rockets at Jerusalem to take control of the situation there. Israel responded by bombing Gaza and killing at least 20 Palestinians.

The situation can calm down within 3-4 days if Hamas, Israel, Egypt, Jordan and the Palestinian Authority see it in their interest for this to happen. Otherwise, if we have new revolts and the road will impose its will this earthquake will shake Israel, Gaza, Jordan, Egypt and the Abraham Accords.