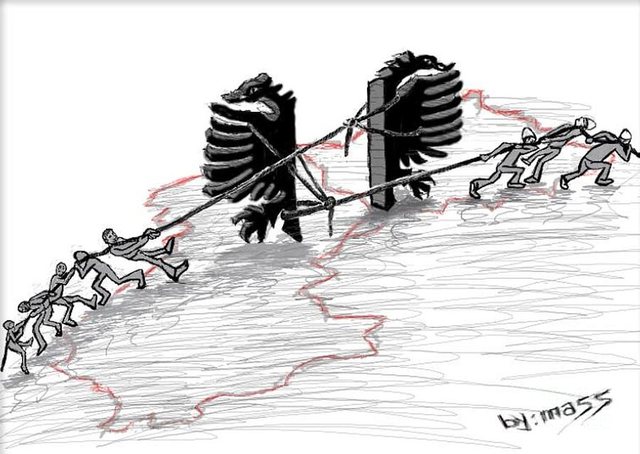 Frank G. Wisner, a prominent career diplomat in the United States, and the son of one of the CIA founders, the newly appointed United States Envoy to Kosovo, during a working dinner in Tirana in 2006 asks guests, among whom and Mr. Godo, informally appointed by the Albanian Government as sent to Kosovo, who are these Albanians who are rising? This question was asked to guests by Albanian political leaders, while the United States was preparing to publicly declare its support for Kosovo's Independence, now as an official policy of the United States.

If this question were to be asked these days in August, who are these Albanians that the United States invested in rising to a new space of freedom in the Western Balkans and watching the fire burning on social media here and there Albanians, around the invitation of the Bosnian singer , Goran Bregovic, would make us blush and like that dinner, in which the question was left unanswered due to the surprise from where it came from, this time we could not answer it because of the shame we could feel.

But, beyond this lament for the cadence of offensive abuses on social media, it seems that such events will now accompany us more and more often, while now it seems that we are in a state of structural tension in the relations between Tirana and Pristina, which should treated at their source, in which Bregovic's visit serves only as a pretext for the next quarrel.

In the multitude of reasons that contribute to this new context of inter-ethnic relations, we can find as a main point the still unclear definition of Vetëvendosje, whether it will serve as a political alternative for the consolidation of the state of Kosovo or as a non-Albanian political cause, as shown with her participation in the political elections in Albania in April this year. It is enough for Kurti's tourist-electoral trip through Albania during the electoral campaign, to understand that he has already established on unstable foundations the relations between the majorities in the two countries. To separate Kurti's visit as Prime Minister in Tirana from that of an opposition participant in the race for power in Albania is as difficult a political task as dividing theological debates over the divine and earthly nature of Christ in the Bible in the Early Middle Ages.

The second reason, not in importance, of this structural tension precedes Kurti's coming to power in Kosovo and finds expression in the abandonment of the official policy of equidistance with the political forces in Kosovo, which has been the sine qua non of Albanian foreign policy under Western influence throughout Kosovo's journey. Under this approach, official Albanian politics excluded any role-playing role as an actor in the Kosovo issue, maintaining good official relations with any government in Kosovo, and staying equidistant from any political force in Kosovo.

It seems that this policy has already been slowly abandoned, while the European integration process and American support for the European integration of the region, experienced fading during the administration of President Obama and then that of Trump. Other observers may see this as an inevitable consequence of the slowdown in the region's European integration process and the awakening of alternative initiatives for closer integration between the countries of the region themselves. In any case, such a development has disturbed the previous bed of these relationships.
Returning to the first reason, as long as Vetëvendosje and Mr. Kurti will continue their ambiguity regarding the political identity of Vetëvendosje and their approach as a political entity in relations with Albania, it will remain impossible to establish normal close working relations between the two governments. This tension becomes even sharper if you read the subtext of a left-wing political identity of Vetëvendosje, which in participating in the elections in Albania is more like a political approach of an "Albanian Brotherhood", where Marxist internationalism is replaced by non-Albanian nationalism.

It can be said without fear that Mr. Kurti suffices and exaggerates the challenges he faces in Kosovo, where he has just taken the reins of governance in the context of a total restructuring of the political scene in the country, to stay away from interference in the Albanian political scene, an approach that not only constitutes an objective obstacle in the relationship, certainly seen with suspicion by the United States and the European Union. Very soon Mr. Kurti will understand that the challenges to governing another standard of Kosovo go far beyond engaging as honest boys in the fight against corruption.

The same amount of work seems to Mr. Kurti has in outlining a clear profile of the relations he and his government enjoy with the United States of America and the major powers of the European Union. While it remains too early to speak, it is clear that a trip to Washington or Berlin would be very useful in clarifying the Kosovo Government's unwavering commitment to closer relations with the United States and clarifying the government's policy stance. outer.

In this sense, it remains unclear to outside observers whether the position of Mr. Kurti in talks with Serbia is a negotiating strategy to improve the specific weight lost by previous governments or a stagnant political stance, which would make the whole negotiating effort and series of meetings in Brussels futile.

Going back to where we started, it is the responsibility of the two governments in Albania and Kosovo to come up with a convincing and unequivocal answer to what Albanians in the Balkans want to know about in this new chapter, where President Biden arrives in the United States. The United States is the last chance for a close, personal commitment of an administration to the Western Balkans, in which top US administration executives have spent years of service during their careers.