Fatos Hoxha revolts with Basha: PD is on the verge of collapse, on the threshold of the road without return. Let's save it 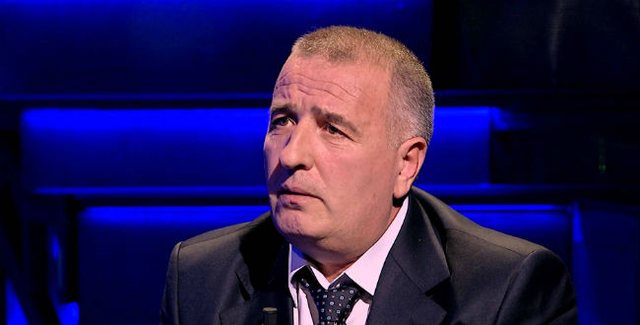 With the release of the first results issued by the winning SP, the first accusations by the Democrats against the chairman of the Democratic Party, Lulzim Basha, have started.

One of them is the former deputy of Kukës region Fatos Hoxha, who has brought back on his Facebook a post from 4 years ago, where he warned of the next loss of PD as a result of Lulzim Basha's decision-making and burning of mandates .

"As I was looking for comfort and hope for yesterday's result, this status made four years ago appeared in front of me. "He neither comforted me nor gave me hope ...", he writes today. 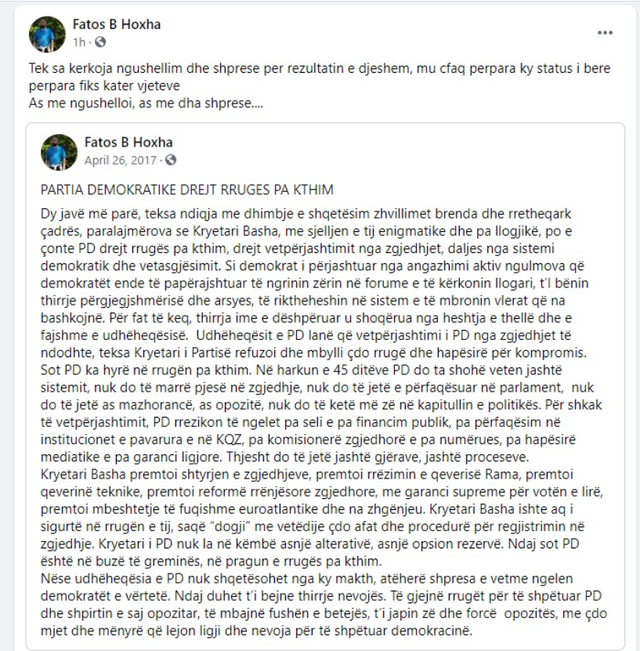 Below is the warning of former MP Hoxha for the Democrats 4 years ago:

DEMOCRATIC PARTY ON THE ROAD WITHOUT RETURN

Two weeks ago, as I followed with pain and concern the developments inside and around the tent, I warned that President Basha, with his enigmatic and illogical behavior, was leading the DP to the path of no return, to self-exclusion from the elections, exit from the democratic system and self-destruction. As a Democrat excluded from active engagement, I insisted that Democrats, still unscathed, raise their voices in forums and hold them accountable, call for accountability and reason, return to the system, and defend the values ??that unite us. Unfortunately, my desperate call was accompanied by the deep and guilty silence of the leadership. The DP leaders allowed the DP's self-exclusion from the elections to take place, while the Party Chairman refused and closed any avenues and spaces for compromise.

Today the DP has entered the road of no return. Within 45 days, the DP will see itself outside the system, will not participate in the elections, will not be represented in parliament, will be neither the majority nor the opposition, will no longer have a voice in the political chapter . Due to self-exclusion, the DP risks being left without headquarters and without public funding, without representation in independent institutions and in the CEC, without election commissioners and without counters, without media space and without legal guarantees. It will simply be out of things, out of processes.

President Basha promised to postpone the elections, promised the overthrow of the Rama government, promised the technical government, promised radical electoral reform, with supreme guarantees for free voting, promised strong Euro-Atlantic support and disappointed us. Mayor Basha was so confident in his path that he consciously "burned" every deadline and procedure for registration in the elections. The chairman of the Democratic Party left no alternative, no reserve option. So today the DP is on the brink of collapse, on the threshold of the road without return.

If the DP leadership is not bothered by this nightmare, then the only hope remains the true Democrats. So they have to call for help. To find ways to save the DP and its opposition spirit, to keep the battlefield, to give voice and strength to the opposition, by any means and means allowed by law and the need to save democracy.