Love in Putin's time: Russian activists who got married on the day of the invasion 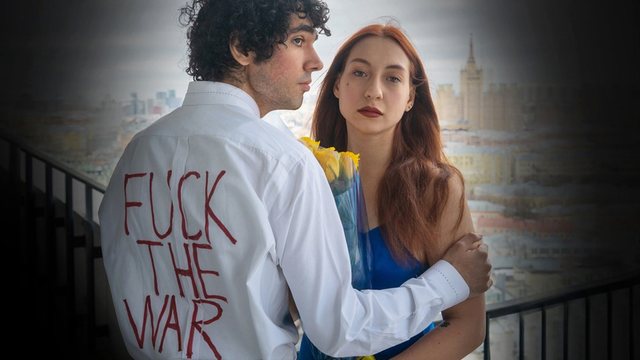 By Ada Wordsworth / Polina Oleinikova woke up on her wedding day, February 24, with her phone ringing. Excited, she moeed him from the bedside table, waiting for congratulatory texts before the ceremony at the registrar's office. Then she saw the news. Overnight, Vladimir Putin had launched what he called a "special military operation" in Ukraine. She started crying.

Although Oleinikova is a political activist and her future husband, Arshak Makiychan, campaigns against climate change, none of them thought she would get this far. Like most Russians, they knew Putin could try to consolidate power in pro-Russian areas of eastern Ukraine. They did not believe he would try to take the whole place. The couple briefly considered annulling the wedding, before deciding that marriage was now more important than ever.

They had known each other for six months and had been together for only three months. Makiychan was 27 years old and Oleinikova only 18. But even before the invasion, marriage was not just about romance: it was "a measure of security," as Makiychan put it. As husband and wife, neither could be compelled to testify against the other. And if one of them were to be sent to prison, he would be allowed to visit his wife - a future sentence seemed possible after each of them was arrested several times.

Last year Oleinikova was planning to go to university. She had excelled in science at school and dreamed of working as a chemist on the International Space Station. One of her teachers was later arrested for participating in a rally in Moscow against the imprisonment of Alexei Navalny, Russia's most prominent opposition leader. Oleinikova postponed her studies to become an activist: "I could not focus on the chemical properties when the world was on fire."

She noticed Makiychan at the last protest. Scrolling through Instagram, she stopped at the photo of a young man with dark eyes and black curls standing alone in Pushkin Square in central Moscow. He carried a placard: "Fight the Climate Crisis, Not Pussy Riot," a reference to Russian rock stars jailed in 2013 for their protests against the regime. She wrote to Makiychan, praising his "delightful action" with heart-shaped emojis.

Shortly afterwards, Oleinikova was arrested for organizing her solo protest in Pushkin Square. "There was a 32% increase in rapes in Moscow in 2021 ," read its banner. "What are you doing about it?" Since 2014, solo demonstrations have been the only form of protest allowed in Russia. But the police arrest lonely protesters with a pretext.

Oleinikova announced on Instagram that she was being held by police, and Makiychan appeared at the station holding tea and chips in his hand. When she was released a few hours later, the couple returned to Makiychan's apartment and "just talked about activist things, " Oleinikova said.

Their first romantic meeting was in December. Makiychan invited Oleinikova to a concert in which his brother was playing the cello. Makiychan was a violinist and attended the prestigious Moscow Conservatory. He was oblivious to the climate crisis until Greta Thunberg began organizing her famous strikes in schools outside the Swedish parliament in 2018.

As Makiychan's knowledge of the environment deepened, he became convinced that a climate change was more important in Russia than perhaps anywhere else.

"Almost all of our money comes from fossil fuels, " he said. " The Russians need to know the truth." Makiychan began to get in touch with climate activists around the world and launched his Thunberg-inspired "Fridays for the Future" movement. Until the summer of 2019, he and other young Russians were holding weekly protests in many cities in Russia.

Makiychan intended to continue studying music in Germany. Instead he gave up the violin to focus on activism. He knew it would be dangerous: a man he assumed was a government agent had already tried to bribe him to leave the country, and another had threatened to stab him during a protest if he did not stop demonstrated. But staying in Russia to continue building the climate movement seemed like "the right thing to do."

His graduation ceremony from the university in 2019 confirmed this decision. "People were reading Pushkin poems about freedom and playing music about nature. But they were not doing anything to protect it. They were going to a big party afterwards and I had a poster in my bag for my protest."

Both Makiychan and Oleinikova understand why most Russians do not actively oppose Putin. They know how dangerous it is to protest, especially now. On March 4, eight days after Russia invaded Ukraine, parliament in Moscow passed a law to punish those who spread "false news" about the conflict in Ukraine - including simply referring to "war" - with a maximum sentence of 15 years in prison. People who express dissent against the "special military operation", as the Russians are required to call it, also face fines.

In January, Oleinikova was briefly arrested for putting up posters at police stations condemning torture in Russian prisons. She was given a small fine and thought that was the end of the matter. But the next day she heard a knock on the door of the apartment in Moscow where she lived with her parents. She could see a dozen or so cops outside and realized they were there for her. " [The police] were knocking and shouting," she said. "I was very scared."

On the phone, Oleinikova's lawyer told her that police could not enter because there was no order. She had two choices, he said: to leave home, be arrested and possibly spend a month in jail, or lie down and hope the police would lose interest in pursuing her.

Oleinikov chose a third way. She contacted Makiychan on Telegram, an encrypted messaging service, and he quickly arrived with a bag of clothes. Oleinikova wore men's pants and a hat. She came out of the masked building. That night, at his apartment, they decided to get married.

On the morning of the wedding - and the invasion - Oleinikov went to do his hair and makeup. It was hard to make up my eyes, she said, because I could not stop crying. She felt better after wearing the dress. Chosen before the invasion, it was the same royal blue as the Ukrainian flag. Makiychan bought her a bunch of yellow roses to match the color of the flag. Then he wrote "Fuck the War" on the back of his white wedding shirt.

They told their guests not to come, reckoning that even a small gathering would feel inappropriately festive. They had only one witness: their photographer. After the ceremony, Makiychan and Oleinikova changed into ordinary clothes and joined the first anti-war demonstration in Moscow.

The wisdom of their decision to marry was confirmed two days later. They had just left home for a protest - Oleinikova was covered in fake blood - when they were arrested. At the police station they were accused of organizing a "mass rally" and were released pending a trial date. They canceled their honeymoon in Armenia, which they had planned for the next day. " When the plane took off," Oleinikova said, "we were at a rally shouting 'No to war!' Putin in jail!"

One week after their wedding, a judge ruled that Makiychan and Oleinikova were guilty as charged and fined them 20,000 rubles ($ 150). They are appealing the fine and do not plan to pay even if they lose, which means they will probably end up in jail.

Many of their friends are now fleeing Russia. Makiychan and Oleinikova also debated whether to leave, but decided to stay there. It may already be too late to leave, Makiychan said. The cost of flights to countries like Turkey or Georgia, which do not require visas, is rising. Crossings on land are also difficult: there have been reports of border guards stopping activists trying to escape.

For now, Makiychan and Oleinikova are continuing with their demonstrations and trying to ignore the news at home. Last week pro-Kremlin parties introduced a bill in parliament to recruit anti-war demonstrators and force them to fight in Ukraine. Rumors are also circulating that Putin may declare martial law and prevent all men of war age from leaving the country. (Putin has denied this.)

At a large rally the couple attended Sunday, about 2,000 protesters were arrested, according to the Russian Interior Ministry; one of their friends got into a police car right in front of them. When I spoke to Oleinikova and Makiychan later that day, they told me they did not know why they had been spared. They looked really shocked that they had returned to their apartment.

In his early days in the climate movement, Makiychan was known for his strong statements: " Activism is the only thing that will save us!" Now he is fatalistic - for himself and Oleinikova, and for the Ukrainians. The only thing left to hope for, he said, is " a miracle".

* Ada Wordsworth is a London-based reporter