Terrorist act in Liverpool! A passenger is killed when a taxi explodes and his driver is injured 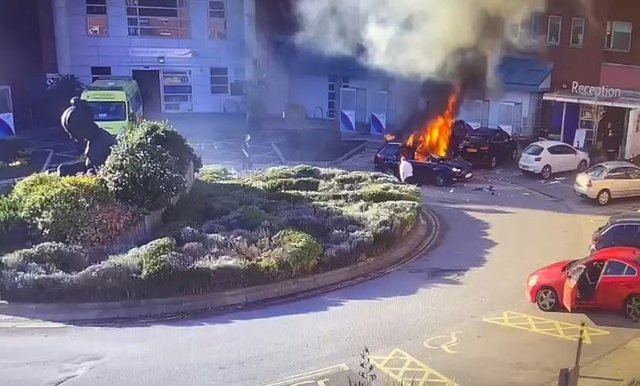 An explosion outside Liverpool Women’s Hospital on Memorial Sunday has been declared a terrorist incident by police.

A taxi exploded and was engulfed in flames shortly before 11:00 GMT near the hospital entrance, killing the passenger and injuring the driver.

The taxi driver, named David Perry, was declared a hero by Liverpool Mayor Joanne Anderson for locking the suspect inside the vehicle and 4 people have been arrested in the city under the Terrorism Act.

North West Terrorism Police Chief Russ Jackson said the taxi passenger appeared to have made an "improvised explosive device" that caused the blast.

Assistant Police Chief Jackson said police knew the identity of the attacker but would not confirm it at this stage. The husband's motivation was "still to be understood," he added.

Prime Minister Boris Johnson will chair an emergency Cobra meeting this afternoon in response to the blast, Downing Street said.

"The man had asked to be taken to Liverpool Women's Hospital, which was about 10 minutes away. As the taxi approached the point of discharge to the hospital, an explosion occurred from inside the car, which quickly engulfed him in flames. Thankfully, the taxi driver left on time, "he added.

Jackson said the taxi driver was released from the hospital after being treated for his injuries.

He said police were "aware that there were memorial events just a short distance from the hospital and that the blast occurred shortly before 11am".

"We can not make any connection at the moment with this, but it is an investigation line we are following," he added.

Police said a fourth person, 20 years old, was arrested earlier in the Kensington area of ??the city and was in custody.

Neighbor Sharon Cullen said she was evacuated from her home near Sutcliffe Street by officers who told her "whatever is happening in the back of the house could blow up the block".

She said she thought four people in their 20s lived at the address.

"I do not know any of them, but one of them always seemed to be on a PC in his bedroom," she said.

People are being allowed in and out of Liverpool Women’s Hospital, but officers could be seen at the entrance to the building and were stopping check-in cars as they entered the parking lot.

Patients have been told to attend appointments as usual, but visit scheduling has been limited until further notice, the hospital said.