The event in Roskovec / The bride and father-in-law are escorted to the last apartment. The son attends the father's funeral 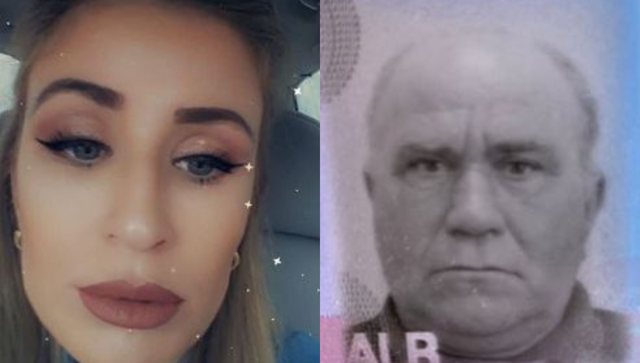 61-year-old Xhevahir Hoxha and Merushe Hazizi, who lost their lives yesterday in Roskovec, were taken to their last apartment. Recall that the 61-year-old stabbed his son's cohabitant and hanged himself behind the house. Few relatives attended Xhevahir Hoxha's funeral, but the media reported that his son, Fajton Hoxha, was at his father's funeral.

Fatjon Hoxha, Xhevahir's son, was previously married and has 1 child 9 years old with his first wife. For about 3 years he lived with the victim and lived in a rented house in Vlora, while about 1 month ago they returned to the village to his parents. The 61-year-old did not like Merushe as she was previously married to someone else and wanted the boy to marry the first woman with whom he has 1 child. 30-year-old Merushe Hazizi was escorted to the cemetery in the village of Suk1 by her family, out of sight of the media.

In an interview with News 24, the 61-year-old's wife said that her husband and daughter-in-law had constant quarrels with each other.

She claimed that shortly after the crime her husband had run away from the ground, and had not told her about what had happened to him in his house.

"The bride did not go with him. When I came he had done that job. She said; 'you do not have to come here because these are my houses'. It annoyed her a lot. months.They stayed for rent.

I was down there, I have a kitchen downstairs. I came halfway to the door and did not dare to go inside. I saw her lying down (the bride). They saw my husband running off the ground. He did not tell me at all. He told me he was going to get off the ground, ran away. Iku u var there. The police went and found him "

Have you ever thought about this?

S'ma priste mendja. I knew he was wild, but I did not think he would do that. I had a maid I ran away with love, she is 12 years old, and she said; I will kill him.

Had he sought a protection order?

Yes he went to the police. She said; you have no home here, no job here. They are my homes.

Where had he killed her? It is said that he was killed in the bathroom
I do not know, here I found blood. He was in the room. Because I know where he killed him, here we saw him.

Were they very busy?

The bride used to say that 'you have no job here'. The son protected the bride, not the father. Javier's houses were. She said I have the houses. They quarreled every day, he talked. He said; shporru. 'To eat me… I do not play from here', said the bride. The boy had the first bride, and that became the reason. This is where Xhevairi stayed.

They all come and go, except for Meghan's sweater, which never goes out of style

The turning point of Europe and the Tirana Summit

Gjylameti: Tirana has a radical change, there is growing support for our candidates

Tina Turner's son Ronnie has been found dead in his home, four years after his brother killed himself

Tirana ready for the big celebration of "Sports Teams in Schools". Here are the roads where traffic is restricted

False alarm for a bomb in the Border Directorate in Laprakë! The suitcase was full of clothes

Kurti: The Kosovo Police is not motivated, nor oriented against the Serbs

The fuel goes down again! From today, oil will be sold at 196 ALL per liter

The next intervention in Tirana on "Hamide Dalipi" street

Who would win, if Tirana's elections were held before Sunday's primaries?

My ticket to success

Bomb alert in 7 schools and 5 shopping centers in Skopje

The power of gratitude

10 highest paid actresses of the year

Friday will be rainy

Elections in the north of Kosovo will be held, but with additional security measures

Was the royal family contacted while filming Meghan and Harry's Netflix series?

The festive tree lights are switched on in the New Market

The disease of conformity

Switzerland approves the agreement on Social Security with Albania

The documentary 'Harry & Megan' is released on Netflix! 5 of the most important moments

For two hours, the border point 'Tre Urat' will be blocked

The 10 most searched characters on Google in 2022. The first one is no surprise

Minister of Defense of Serbia: Kurti is seeking to evict the Serbs from Kosovo

In tears, Celine Dion reveals the incurable disease she suffers from

Tirana closes the year as the 'European Youth Capital', Veliaj: The best days are ahead of us!

Elon Musk turns Twitter into a 'hotel' for staff

What are the most powerful passports in 2022 and where is Albania ranked?

When it can be said that emotional maturity has been reached

'Wordle' is the most searched word on Google in 2022

The power of gratitude

10 highest paid actresses of the year

Horoscope for December 8 by Russell Grant

The right advice to save money, according to the sign of the Zodiac