The apartment in Durrës was turned into a drug laboratory, with two people in handcuffs 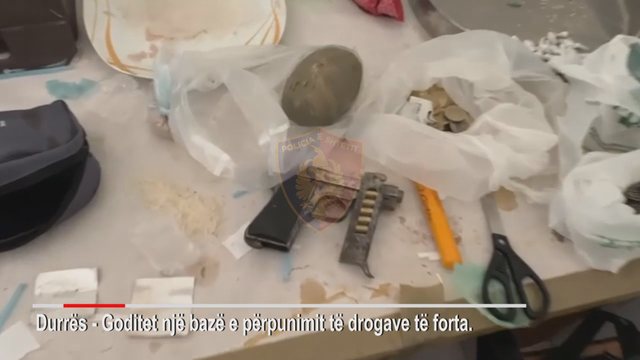 An apartment in Durrës turned into a laboratory for processing narcotics was discovered by the Police.

EV, 33 years old, and K.XH, 32 years old, have been handcuffed from Operation coded "Base".

Police seized 1 Beretta firearm, ammunition, 2 electronic scales, a sum of money of 73,940 ALL and 49 euros monetary value obtained from the sale of narcotics, 408 grams of heroin and 11.5 grams of narcotics narcotic cocaine.

Details from the Operation:

The operation carried out by the Durrës Police Commissariat, in cooperation with the Narcotics Investigation structures in the DVP Durrës, in order to crack down on criminal activity in the field of narcotics and illegal possession of weapons.

Arrested in flagrante delicto 2 citizens who had adapted the rented apartment as a basis for processing and distribution of cocaine and heroin.

The services of the Durrës Police Commissariat, in cooperation with the structures of the Narcotics Section in the Durrës DVP, following the controls in order to increase the security parameters in the city, apprehend persons possessing firearms, and crack down on criminal activity in the field of distribution of narcotics, based on information provided by the Durrës Police Commissariat, have well organized the work and as a result have successfully finalized the police operation codenamed "Base", in which citizens were arrested in flagrante delicto:

K. Xh., 32 years old and EV, 33 years old, previously convicted for the criminal offenses "Failure to report a crime" and "Production and sale of narcotics", both residents of Durrës.

These citizens, in cooperation with each other, had rented an apartment in the neighborhood no. 8, Durrës and had adapted it for the processing and distribution of narcotics.

During the search in this apartment, the Police services found and seized as material evidence 1 firearm type "Beretta", ammunition, 2 electronic scales, an amount of 73,940 new lek and 49 euros monetary value obtained from the sale of the case narcotic, 408 grams

cocaine, which these citizens prepared in small doses, ready for sale in the city of Durrës.

Under the direction of the Durrës Judicial District Prosecutor's Office, work continues to identify and apprehend other persons involved in this criminal activity.

The materials were forwarded to the Durrës Judicial District Prosecutor's Office for further action.