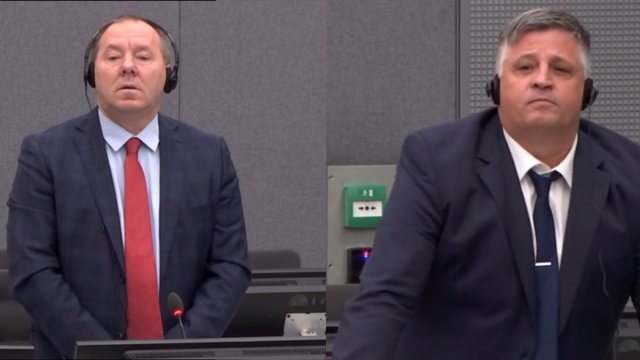 Today in the Special Court of Kosovo based in The Hague, the trial was opened against the former leaders of the Organization of War Veterans of the Kosovo Liberation Army, Hysni Gucati and Nasim Haradinaj. Both are charged with "obstructing officials in the performance of their official duties, intimidating witnesses, retaliating and violating the secrecy of proceedings".

They were arrested on September 25 last year, after on three occasions that month the War Veterans Organization said it had received thousands of Special Court files from unknown individuals, testifying to its co-operation with Belgrade authorities and as it is said, its one-sided character.

The Prosecution said that with these actions, Hysni Gucati and Nasim Haradinaj violated the secrecy of the procedure and intimidated the witnesses of the Specialized Prosecutor's Office and as a result, obstructed the work and investigations of this Prosecution. Gucati and Haradinaj reiterated today that they feel innocent of all the charges against them.

The former President of Kosovo, Hashim Thaçi, the former chairman of the Democratic Party, Kadri Veseli, the former head of the parliamentary group of the Vetëvendosje movement, Rexhep Selimi, the former speaker of the parliament, Jakup Krasniqi, and two former members of the Army are currently in The Hague. Liberators, Salih Mustafa and Pjetër Shala.

They are all charged with war crimes and crimes against humanity.

On September 15, the first war crimes trial was opened against Mr. Mustafa, who is charged with criminal offenses; arbitrary detention, cruel treatment, torture and unlawful killings during the Kosovo war.

The Special Court was established in 2015 and operates under the laws of Kosovo, but with international staff. Its rise as well as the accusation have been constantly accompanied by reactions and protests in Kosovo, where it is claimed that in this way the atrocities committed by the Serbian forces during the war of 1998-1999, which ended with the NATO intervention, are being made. s.