Germany supports Open Balkan, Albin Kurti: Albanians should be strongly connected and then open with neighbors 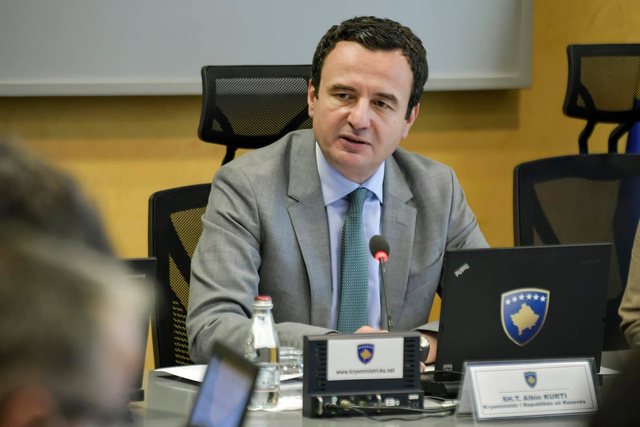 'Albanians are stronger only when they are strongly connected to each other and then they can open up to their neighbors without being endangered'. This was stated by the Prime Minister of Kosovo Albin Kurti, regarding the Open Balkan-Schengen Balkan initiative that yesterday was supported by the German government and called for involvement from all parties (for Kosovo which has boycotted to be part because of Serbia).

Albin Kurti spoke during the event "Albanian Causes - before and after Hasan Prishtina", organized by the Institute of Spiritual and Cultural Heritage of Albanians held today in Skopje.

Among other things, he said: The region gains long-term security and stability only from the punishment and isolation of criminals, and none of the Albanian politicians should cooperate with crime.

Dear friends, Skopje, Albanians from all over the Republic of Northern Macedonia,

Distinguished representatives of the Institute of Spiritual and Cultural Heritage of the Albanians in Skopje,

Thank you for the invitation you have given me, as organizers of the forum on "Albanian Causes before and after Hasan Prishtina".

At the same time, I apologize for not being able to physically participate today in this activity held on the occasion of the Year of Hasan Prishtina, in honor of the 100th anniversary, since this remarkable figure of our history, was the Prime Minister of Albania. I could not come because of the many commitments and important discussions of the Assembly of Kosovo, but I would like to be with you. In a few days I will certainly be there, as a participant in the inauguration ceremony of the Boulevard "Hasan Prishtina" in Skopje.

If I were there, we would certainly have discussed at length the contribution of Skopje and the Albanians of Macedonia to the national cause. From our honored women of the Nation, Sevasti and Parashqevi Qiriazi and Gonxhe Bojaxhiu, Mother Teresa, from the early uprisings of Dervish Cara since 1844, until the liberation of Skopje by Hasan Prishtina, Bajram Daklani, Bajram Curri, Isa Boletini, Mehmet Deralla , Idriz Seferi et al. We would also talk about the developments and deepening of the Albanian strategic thought, from Ukshin Hoti to Arbën Xhaferri. But we will discuss all this in other cases.

The message I want to give today is that of being close to each other, with joint projects, coordination and work. Only when we are strongly connected to each other will we be able to open up to our neighbors without being endangered.

Our direction as Albanians is the west, our allies are the US and the EU, our legitimate aspiration is equality with other peoples of the Balkans and peaceful and democratic national unity, and our most urgent task is to fight corruption and pave the way for economic development . The region gains long-term security and stability only from the punishment and isolation of criminals, and none of the Albanian politicians should cooperate with crime. Good times are coming for the Albanians but also for our neighbors, because our great partners are more determined than ever to help us in our fight for justice and democracy, but also against the negative Russian-Chinese influences in our cities and countries. , but also in the region. I am sure that Albanians, in all Balkan countries where we live and work,

I greet you all and wish you good work in the tribune sessions, with deep respect for the organizers, scientific collaborators and all participants.

Albin Kurti, Prime Minister of the Republic of Kosovo.

Jack Dorsey resigns as CEO of Twiiter! Here is who will replace him

Are discussions with your partner turning into quarrels? Here's what to do