Veliaj donates the Key of Tirana to the Fund Director, Khalifa Al Kuwari The Qatar Development Fund will invest in Tirana full 5 million dollars for the reconstruction, with a focus on schools and kindergartens, Qatar's contribution to the Donors' Conference in Brussels. The Director of the Qatar Development Fund, Khalifa Al Kuwari, after signing with the Prime Minister the grant agreement that paves the way for these investments, held an official meeting with the Mayor of Tirana, Erion Veliaj.

Today I am grateful that 5 million dollars have been allocated to make the school "Lasgush Poradeci" in Kombinat from scratch, which will be 10 thousand square meters and will accommodate all the needs of Kombinat; The other school, "September 16" in Peza, is another fantastic school, among the first to be damaged by the earthquake, as well as a garden in the middle of Tirana, kindergarten 42, another construction site associated with urban legends that there will be constructions, there will be palaces, but in fact we will make the garden ", said Veliaj.

Considering the signing of the grant agreement an extremely excellent news for Tirana, the mayor assured that in all three these construction sites will work at a fast pace to enable the children to develop education in completely new facilities next school year. 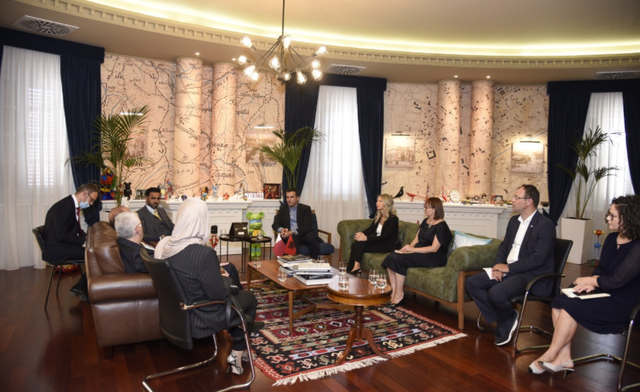 "The next school year finds the children in the new kindergarten and nursery. The new schools will accommodate more students than we have historically had. As the Combine will expand with the new neighborhood, it is key for us to do things, not only stronger and better, but also with a space many times larger than what we had more forward, "he said.

The Mayor of Tirana presented the Key of Tirana to the director of the Qatar Development Fund, Khalifa Al Kuwari.

"As a sign of gratitude and thanks for this concrete, useful help, for this sincere friendship in our day of misfortune and need, I give you the Key of the city of Tirana, as a gesture of an open heart, of an open door , as a symbol that in our city you are always welcome! "I very much hope that the bridges we have connected, especially with these investments in education, will be the strong union between the friendship of Qatar and Albania", said Veliaj.

The director of the Fund, Khalifa Al Kuwari, thanked the mayor Veliaj, while affirming that the relations between our two countries are excellent. "I am very happy and proud that we had the opportunity to stay close to you in difficult days, even in good days, and that we had the privilege and opportunity to help you, especially after the earthquake," said Khalifa Bin Jassim, among others. Al Kuwari.

Two years ago, the Qatari embassy donated $ 1.35 million for the reconstruction of the 9-year-old Jeronim De Rada school, which has been completed and is ready to host students in completely new facilities on Monday. Mayor Veliaj thanked the Ambassador of Qatar to Albania, Ali bin Hamad Al-Marri for this investment.