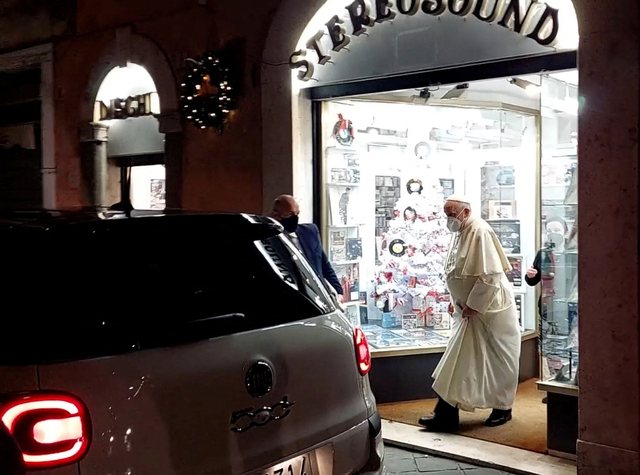 Pope Francis has long complained that he could not walk around the city unnoticed, as he did before becoming Pope. But he seems to have nevertheless retained his sense of humor after being caught on camera making an unannounced visit to a record store in Rome this week.

Francesco wrote a note to the Vatican journalist, who was at the venue on Tuesday evening at the right time when the Pope left the Vatican to 'bless' the newly renovated Stereo Sound store near the Pantheon.

Javier Martinez-Brocal, director of the Rome Reports news agency, filmed the Pope leaving the store, the images went viral and even published in the Vatican newspaper L'Osservatore Romano.

Martinez-Brocal then addressed the Pope with a letter explaining that he was not a paparazzi, and regretted that Francesco could no longer move unnoticed, but this story was a much-needed dose as good news in a world gripped by tragedies.

"I will not deny that it was (bad luck) that after taking all the precautions, there was a journalist waiting for someone at the taxi line," Francescu wrote in response to the journalist. But he added: "You can not lose your sense of humor."

Francesco then reiterated that what he misses most now that he is Pope is the inability to take walks, as he once did in Buenos Aires. Former Cardinal Jorge Mario Bergoglio was known for using public transport through the Argentine capital, avoiding private cars used by other cardinals to visit parishes. He became pope in 2013.

Francesco admitted that Martinez-Brocal was simply doing his job as a journalist when he recorded the event. "Thank you for doing your homework, even if it put the Pope in trouble," he wrote humorously.

The owners of the Stereo Sound store told the 'Associated Press' that Francesco had left around 19:00, without announcing. He had told them during a previous meeting at the Vatican that he would go to visit the facility.

"He walked into the store and it was a wonderful meeting. "And as he promised, he blessed the store," said store owner Tiziana Esposito.

Co-owner Danilo Genio said that Francesco had been a client for a long time, having gone to Rome every time for meetings at the Vatican when he was in the office of priest, archbishop and then cardinal of Buenos Aires.

"Every time he came to Rome to go to the Vatican, he first stopped here to buy some gifts," he said.

Francesco, who grew up listening to opera on the radio and likes tango, Mozart and Wagner, bought nothing this time. But the shop owners gave him a CD with classical music.

It's expensive jet summer, for Europe fares have doubled

He has a job, he also finds professionals at the Metropolitan University

WHO: Cases of smallpox may increase in the summer months

Rama in Vlora: People with properties in Lungomare have become richer after investing

Veliaj demands the cooperation of citizens: Help us by not throwing waste on May 25

Conference League / Veliaj: Leave the car at home and avoid coming to Tirana

Is religion the new dividing line between Russia and the west?

You can get unlimited summer trips for $ 9.50 in this European country

The project of the port of Durrës is presented

80 cases are confirmed in 11 countries with monkey line

Temperatures up to 31 ° C today, but in the afternoon there may be rain in some areas

The Economist: How the world is heading for food disaster

Albania, a new energy transit corridor to the Balkans and Europe

Michel makes a basket in the office of Prime Minister Rama

Shots at a McDonald`s in Chicago. 2 killed and 8 wounded

The truth about the health of former Prime Minister Fatos Nano

The most beautifully dressed at the Cannes Film and Fashion Festival

President of the Council of Europe: I support the Open Balkans. Facilitates the path to the EU

Negotiations can be opened to Albania

Arben Kraja of SPAK: We had only one case of information leakage. It happened by the State Police

Head of SPAK, Kraja: This is what the money confiscated from criminal activities was used for

Rama receives the President of the European Council on the Boulevard

With $ 500, Samsung puts your face in the fridge

Ed Sheeran has become a father again and only discovered gender

Rihanna becomes a mother, gives birth to a son

Horoscope for May 20 by Russell Grant