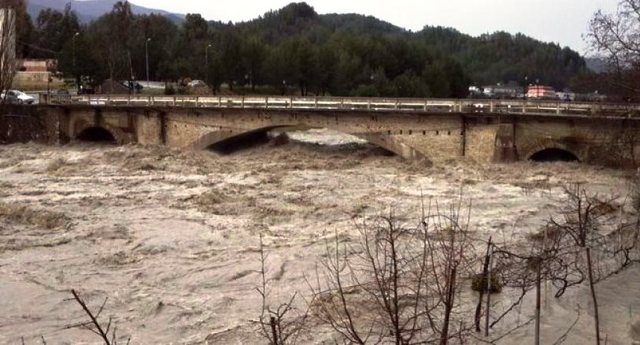 Significant deterioration of atmospheric conditions in our country seems to have resulted in floods and other problems throughout the territory.

Heavy rains have caused the Vjosa River to swell beyond normal and consequently rise out of bed at some points. In the Përmet area, the Vjosa level has reached 5.3 meters, while the critical point is 5.4.

The level of the Vjosa River is currently at 6.34 meters, which has led to the flooding of the livestock market in Novosela.

Problems have also been noticed in the area of ??Gjirokastra, where during the night the Lënxë stream in the village of Lazarat came out of bed, creating problems in the circulation of people and cars that connect the two main neighborhoods of this village.

Intense rains since yesterday noon have brought problems near the underpass of the highway in Fushë-Mamurras. Rainwater has flooded the underpass making it difficult for vehicles to move.

While the situation on the rural axis Kolonjë-Golem remains problematic, where the inerts dropped from the heights as a result of the rains, have created a road blockage. Currently, Golem residents are isolated from the rest of the country as a result of this situation.

In Lezha, bad weather has brought heavy rains, which have covered the roads and sidewalks, despite the fact that it has melted shortly after it fell due to movement.

Even in the region of Korça, there could be no lack of snowfall, where snowplows were engaged to clean the road and distribute salt.

This morning, Kukes woke up covered with snow, which started in the deep mountainous areas such as Novosej, Shishtaveci, Borje and Topojani, where temperatures have dropped significantly, bringing winter.

Snow has also fallen on the mountain of Gjallica and it is expected that in the following days the low areas below it will descend. Meanwhile, the city of Kukes in the last 24 hours has been affected by bad weather with heavy rain, but fortunately without causing problems.

Regarding the weather situation in the country, the political leader of the Socialist Party for the Region of Fier, Taulant Balla, also reacted, warning the residents of the Divjaka area about floods.

As he watched closely the level of the Shkumbin River in Papër, Elbasan, Balla called on residents to remove livestock or agricultural implements from the lands along the river from the Upper Çerma and other ravines along the Shkumbin.