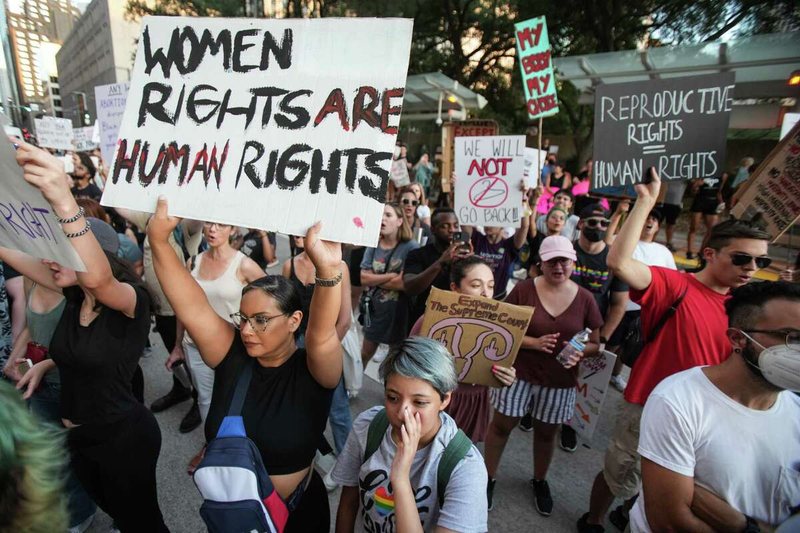 The U.S. Supreme Court has overturned a decade-long ruling, known as the Roe v. Wade case, under which women enjoy a constitutional right to have an abortion.

The decision was expected after a preliminary opinion on the issue was leaked to the media earlier this year. It is now up to the states to decide whether or not to allow abortion. It is expected that he will be banned in about half of the American states.

Following the US Supreme Court ruling, anti-abortion activists are celebrating. This institution ended almost 50 years of constitutional protection for abortion by rejecting the historic issue "Roe vs. Wade".

"We are here to celebrate. We are very happy with the court decision. "It's something we've been fighting for for decades," said one anti-abortion activist.

In a reaction shortly after the decision, President Joe Biden called on Congress to pass a federal law protecting women’s right to abortion.

"There were three judges appointed by President Donald Trump, who with today's decision eliminated a fundamental right for women in this country. With this ruling, the conservative majority of the Supreme Court shows how extreme it is. "How far are they from most of this country?" Said President Biden.

The latest Gallup poll shows that trust in the Supreme Court has fallen to its lowest level, at 25%. Conservative Judge Samuel Alito, appointed by former President George W. Bush, wrote in a final opinion released Friday: "The Constitution does not refer to abortion and no such right is directly protected by any constitutional provision."

The Supreme Court ruling came after reviewing a Mississippi state law banning most abortions after the 15th week of pregnancy.

"There are about 13 countries that have restrictive measures for abortion and that will immediately make laws to ban abortion completely. "In general, about 26 countries can virtually ban abortion," said Elizabeth Beske, of the American University.

The final decision may force women to go to other states to have an abortion. About 15 states are expected to guarantee the right to abortion. Advocates of abortion see the decision as an attack on reproductive rights and privacy.

"I will work to ensure that abortions do not stop," said Helen Luryi, an abortion rights activist.

The decision by the Supreme Court came about a month after the leak of the preliminary opinion indicating that the court was prepared to take this step. Meanwhile, some states across the country have begun to change the approach to abortion by law.

The medieval ghost town of Granadilla, one of the most beautiful towns in Spain

Scorching heat, the Rhine and Danube rivers dry up

Pope: The war in Ukraine is distracting attention from hunger

Powerful explosion in a shopping center in Armenia

Back to School retailers are slashing prices across the United States

Take a day off after the holidays!

There are no more free photos with Emilia Clark. The actress also sets a price for meetings

Hilary Duff's cry of pain on social networks: My daughter is sick and I can't be with her

Soon twinning between Tirana and Taranto

The EU appeals to Kosovo and Serbia: Stop the inflammatory rhetoric! If there is escalation, politicians will be responsible

French magazine: What are the places that should not be missed in the land of optimism, in Albania?

'The Sun' about Albanians who emigrate to England: How they come illegally and return to their homeland with a Maserati. Salianji-Fuga replica

Salman Rushdie emerges from intubation and is able to speak

For better or for worse, until…money do us part! Financial betrayal that is separating couples

Terrorist attack on a bus in Jerusalem

Horoscope for August 14 by Russell Grant

Reasons why people lie even when they don't have to

8 Actors and Actresses Who Turned Down Million Dollar Roles

Are you planning to live with your partner? Ask each other these questions first

Family spends 48 hours in nature because of Google Maps, should be a lesson for everyone

Mental or physical work? Which makes you more tired, according to scientists

These three zodiac signs are most likely to break your heart

Is there a second life beyond death? The convincing and beautiful answer of the science journalist Piero Angela

The supergiant star Betelgeuse had an unprecedented massive explosion

Boris Johnson is filmed shopping in Greece shortly after resigning

Normality is restored in Kakavija, counters are added at the Greek border

Long queues at the border points between Albania and Greece

Vaqarri with a new school, Veliaj: It is added to the package of 12 schools opening this September

Salman Rushdie in serious condition, risks losing one of his eyes

The rain helps with the fires, out of 20 active fires, only 1 remains in Durrës

Family members confirm the death of the Hollywood star: We lost a bright light

Temperatures drop, rain today all over the country

Take a day off after the holidays!

French magazine: What are the places that should not be missed in the land of optimism, in Albania?

There are no more free photos with Emilia Clark. The actress also sets a price for meetings

Hilary Duff's cry of pain on social networks: My daughter is sick and I can't be with her

Horoscope for August 14 by Russell Grant

These three zodiac signs are most likely to break your heart

Horoscope for August 13 by Russell Grant