Tirana today is the center of the Western Balkans. Agenda and agreements to be signed 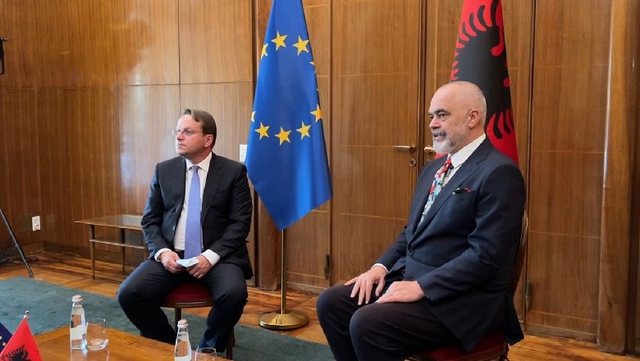 Today in the Palace of Brigades is being held the Summit of the leaders of the Western Balkans, which will be chaired by Rama and Varhelyi.

At the Summit, Serbia will be represented by Prime Minister Brnabic, Kosovo by Albin Kurti, Northern Macedonia by Zaev, and Montenegro by President Milo Djukanovic. The Summit will be attended by the Secretary General of the Regional Cooperation Council, Majlinda Bregu and the Director of the CEFTA Secretariat, Emir Djikic.

At 12:30 Rama and Varhelyi will hold a press conference and then at 15:00 important agreements in the economic sector will be signed.

Below is the agenda of what will happen today at the Tirana Summit:

Location: Palace of the Brigades

09.30 - Bilateral meeting with Zoran Tegeltija, Chairman of the Council of Ministers of Bosnia and Herzegovina (PHOTO + Official Camera)

10.30 - Arrival of delegations (PHOTO + Accredited cameras placed in the yard in front of the entrance)

Zoran Tegeltija, Chairman of the Council of Ministers of Bosnia and Herzegovina