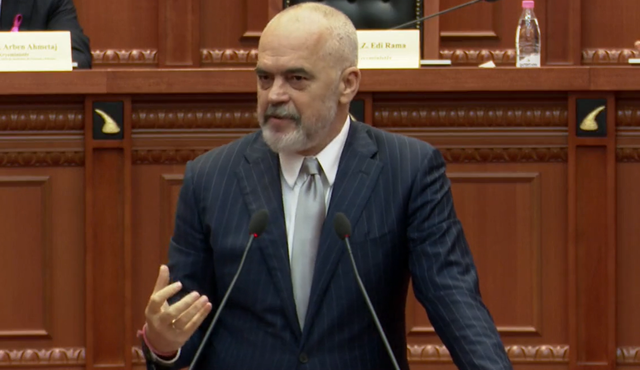 During his speech in the Assembly, Prime Minister Rama announced the sending of satellites into space to monitor criminal activity in the country. The procedure will start next year.

The satellites will be called: "Albania 1 and Albania 2".

"We will buy drones and bring satellites into orbit. We will do this next year, Albania 1 Albania 2, because for us this country is not a learned land," Rama said.

"Tell the Albanians that they sell it cheaply and buy it expensive. This is not a secret, it is a public fact. This is because we still do not have the capacity today to keep water reserves beyond the limit allowed by the safety of dams. And when the water comes from the sky more than capacity holds, we have to pour it.You did it.But unlike you we took Skavica out of the drawer and it is today a project with the US that is in progress.The construction of Skavica will make us to decide when we sell energy, not out of grief, but following the moment when demand is highest.Around the place where our energy is bought, the weather is the same.When we want to buy energy it is another thing, because it is the peak of the drought, and for this we have found intermediate solutions until the construction of Skavica.

Are you consuming? But where do you base this? Where are the figures, the facts? Or is it the gramophone record that has been spinning since 2013 in the same way. How is consumption falling where imports without energy have increased 87%? How is consumption falling when small savings in banks today are higher than they have ever been? I'm talking about ordinary people saving. Then it is said that the Lloagars Tunnel is an economic loss. But on what basis do you say that. You have shown that with road prices you have had a much more distorted ratio than arithmetic.

La voce padrone ka ik te foltorja. The new law to avoid terrible abuses, has stipulated that the price is only 50% and the rest are the necessary guarantees. Will we buy drones? No, we will buy drones and launch satellites into orbit. We will do this next year, Albania 1 Albania 2, because for us this country is not a learned land.

You have left us a situation that definitely takes time, patience, to clean up here and there, it does not end, but we look very far. I mean, drones and yes, but also satellites, so that control over territory, over traffic, over borders, passes to the level of technology and is removed from the hands of those who control with the eyes, to be honest , when it comes to inspectors, those you had, even those we have, are infected with the virus. Therefore, we will take our eyes to heaven to control and we will control from heaven. You laugh because laughter has a party program. "Even though today you are in the conditions, when you laugh, because you can not cry", said Rama.