Rama to the opposition: Forget the "Becchetti" commission, you are defending a wanted person! 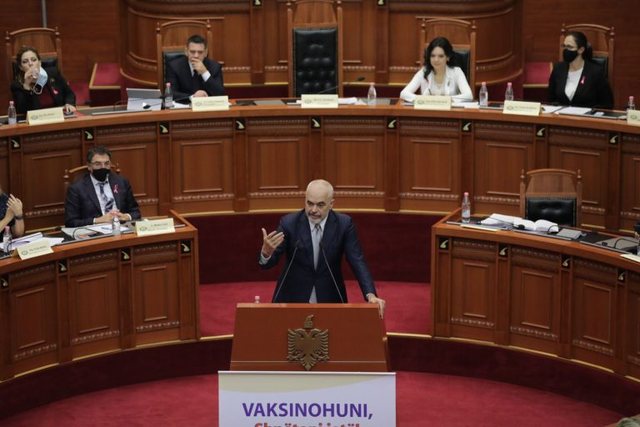 During his speech in the Assembly, Prime Minister Rama also addressed the opposition on the "Becchetti" case and the request of the Democratic Party to set up an investigative commission.

Rama says that such a commission cannot be set up, as this issue is under trial in a neutral area.

"This person you have turned into your hero is wanted (Becchetti). You are protecting a wanted man ", said Rama.

Rama's speech regarding the Becchetti case.

"Beyond the rhetoric, I'm telling you so. It is a criminal process in the Tirana prosecutor's office in trial for some time where witnesses are expected to testify who for several months have had difficulty locating. This person you turned into your hero is on the lookout (Becchetti). You are defending a man in search. You protect this man to make politics and forget that all these obligations imposed by others are obligations for the Republic of Albania. You are also citizens, voters and losers of the elections in the Republic of Albania. It is not divided, despite the fact that you want to make a new Republic. There are two decisions in favor of the Albanian state. Before the international bodies of all jurisdictions, the Republic of Albania is a jurisdiction. You want to put your plight into a story with a fugitive from Albanian justice.

You misinform by opening a document that is covered by confidentiality by inventing that; the albanian state has started to pay, this is completely untrue. You want a commission that violates the principles and harms the interests of Albania. I am reminding you that the confidentiality of these processes is binding on Albania, and should be binding on the elected representatives of the Albanian people, I am not talking about Qimi.net. Parliament must be binding. There is an earthquake, you are with the earthquake, the virus is coming, you are with it, there is an energy crisis, you are with it, now you are our allies and with that. I am not at all of that production house, of the gramophone that says about everything; you did it for this reason. I'm not saying you took a bunch of sunflower seeds from this one and you're eating them. I'm not saying. I'm not getting into these. Lulzim, Lulzim, I have said that I do not add to the problems of the people of Halle. Je hallexhi sot. I am following you.

Later we have time again. You are a Hallejian, but just do not make a mistake to enter the competition with that of the 'speaker', because it makes your mouth water (Berisha). Do not do this. That in that field he is better than you. He is the original, you copy. For hemp he is worldly. You do not compete hemp with hemp that you are not. You are too big a giant to be like him. The last one I have. You must forget the commission in question, that the commission in question is not done. Who on top where, this is your part. I do not interfere. Since I also have a weakness, perhaps a matter of age, being a little bigger than Flowering, I told him personally; do not imitate him, that cloud in the pit. Like him you can not become and never became. Be at the height of combed hair and at the height of the suit, do not spoil your mouth like today. You are known to hide well what you think, but not verbally, please! "You can not become the most depraved mouth of this parliament." said Rama.

A lifeless body is found in Peqin. He was killed with a gun

No, virginity does not exist!