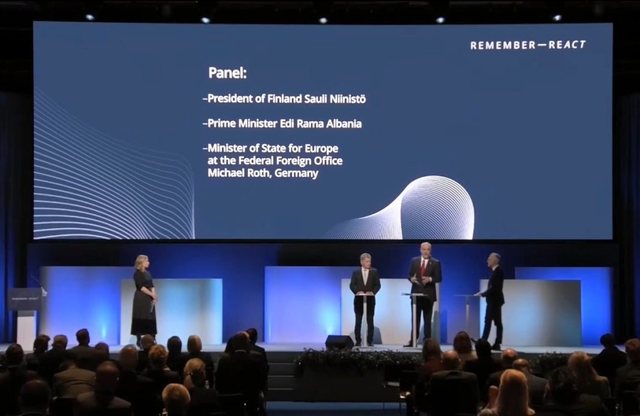 Rama stressed that Albania was the only country in Europe with more Jews after World War II than before it and drew a parallel with the reception of 4,000 Afghan migrants this year.

"Thank you. I have a three-chapter speech here, I will speak briefly. I doubt if everyone in this room knows the story of the salvation of the Jews in Albania, so I will have to repeat what I said in one of the sessions; Albania is the only country in Europe with more Jews after World War II than before it and is the country that turned into a safe haven for Jews, who came just to find shelter and escape at the very time when on our continent, being Jewish was practically a death sentence.

It would take a long time to show how it happened and the reasons for it, but at the core is our customary law, the code of honor of Albanians, our first Constitution, if I may say so, since the Middle Ages. It all starts with a paragraph that says 'the house of the Albanian belongs to God and friend'. The literal translation is not "friend" in the sense of the people you invite, but of the traveler who, in search of shelter, can knock on your door. There follows a whole explanation of knocking on the door, the obligation to open it, and the harshest punishment of customary law is for those who do not respect this paragraph. The most serious form of dishonor is to betray the friend.

Thus, the Jews in Albania were even before a small community and Albania was among the few European countries that defined by law the right of their Sabbath. The Sabbath was a legal right and no employer subject of the public or private sector could penalize, a person, a Jew because he was not at work because of the Sabbath.

What did we do with this whole story afterwards? I think it is essential for us to continue to walk in this direction and to do as much as we can for our children, not only to learn from this story, but also to stay true to this code of honor.

We were the first country to open its doors to Afghans and agree to shelter 4,000 Afghans, and by the way, the opposition in our country was negligible, as Albanians naturally find themselves in need, as we were thirty years ago, when we fled the brutal regime and found doors that opened to us when we needed it.

Finally, to conclude, I felt touched by the coincidence in this forum that, in the same plenary session earlier, the head of Yad Vashem (Holocaust Museum) was present; because I came here with a document that contains new news about this story, in the sense that, according to the register of Yad Vashem, the Jews who were rescued in Albania were 2265 and this list belongs to the year 2005… But we have continued to study, we continued to go deeper through a very good team at the Academy of Sciences, led by an eminent professor and so today, I submitted to the honorable gentleman a new list, which goes to 3750 names. This is an additional contribution that Albania gives to the museum where we are very proud to be part of, as much as we are proud that Albania has been evaluated among the "Righteous among the nations",