The Prime Minister talks about media freedom not through his examples in Albania, but with two foreign newspapers 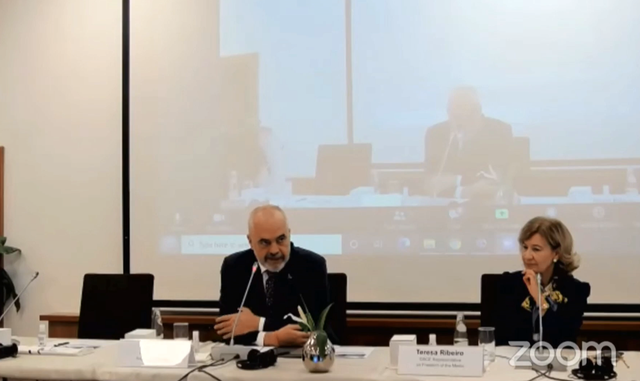 In his speech for "Journalism in times of crisis", at the OSCE conference on Southeast Europe, Prime Minister Rama emphasized the freedom of the media and the violation in the name of this freedom, of individual freedom. The Prime Minister did not refer to cases or experiences in Albania, but recalled two stories with foreign media, bringing them as examples of correctness.

"I am not exactly the right person to be invited to these kinds of meetings because of my opinions that differ from those that are politically correct, not when it comes to media freedom, but when in the name of this freedom, many things happen. things that harm freedom I refer to the spread on the Internet of fake news that tends to be against the freedom of other people.

I think we need to reflect. We have probably learned the hard way that this is not just about government, much less about small countries. Because when it comes to facing this challenge, we have to face a host of prejudices and reactions that come from the world of political correctness.

In the 90s from a The Guardian article was my first contact with foreign media. I was shocked at how meticulous they were. They wanted to distribute a short article of mine and were waiting for an answer from me, but we did not have phones and they were definitely waiting for my answer.

Next time he was with a New Yorker journalist who came for a profile in Tirana. Before he left he said to me: I have to tell you that there is something else left. You have to go through a neurotic process when you read my article and everything that has been written. I barely understood it at the moment, but they wanted the man quoted in the article to agree with every word written. When I told him this is superfluous. "She told me: 'This is why we have not lost any trial in the United States,'" Rama said.