What caused the tragic accident in Bulgaria? The first suspicions are dispelled 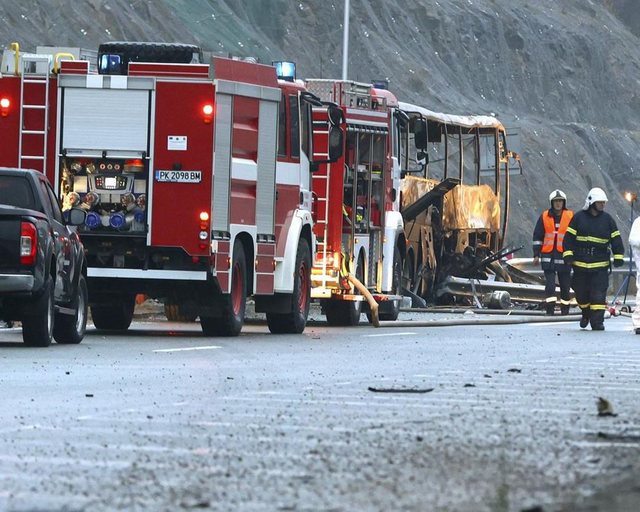 Preliminary suspicions about the possible reasons that may have caused the accident with 46 victims and 7 injured this morning in Bulgaria have come to light.

The media of Northern Macedonia report that according to the initial information, the front tire of the bus exploded on the right, and then it crashed into the railing and was dragged. At that moment, the fuel related to the heating in the bus was spilled, after which the fire broke out. This happened in the front of the bus.

These details were revealed in a statement to Bulgarian National Television by Vasko Pirgov, who is an expert on internal combustion engines and was among the first to arrive at the scene of the morning tragedy. According to him, the driver near the front seats had pipes filled with oil, and because of this the explosion occurred.

"The fire occurred due to the mistake of the driver, who was distracted on the road. There is a fountain where people in need stop, it is for a break, there are several such locations and it is woven with the bench. Entering the sidewalk, the driver hit and broke the sign indicating that there is a tap. That sign flew about 35 meters. The bus must have been moving at a speed of more than 100 km per hour. The bus has no braking signs, that is, the driver did not react appropriately "- stated Vasko Pirgov - expert on internal combustion engines.

"We are coming back to the main versions, is it a human error or a technical malfunction of the bus? He was also the second driver, but we can not say if he escaped. We think that both drivers did not survive, "said Borislav Sarafov, Bulgaria's National Investigation Service.

"Here he is at the scene, where the bus is, he is also the owner of the transport company. I spoke briefly with him. He said that he has been a transport company for 20 years. So far there have been no incidents, according to him. "But, as colleagues have already said, we will provide complete documentation for all buses - when they are registered, when they have been for technical inspection and will send them to colleagues here in Bulgaria." - said Vilma Ruskovska, Prosecutor of Crime organized and crime.

"The documents for the ownership of the bus have been provided and we will hand them over to the colleagues of the Bulgarian Public Prosecutor's Office. "But many documents need to be studied to prove the facts," said Ljubomir Joveski, Macedonia's chief prosecutor.

Prime Minister Zaev and his Bulgarian counterpart Stefan Janev stressed that today they will not speculate on the causes of the accident, but this will be confirmed by the investigative bodies.