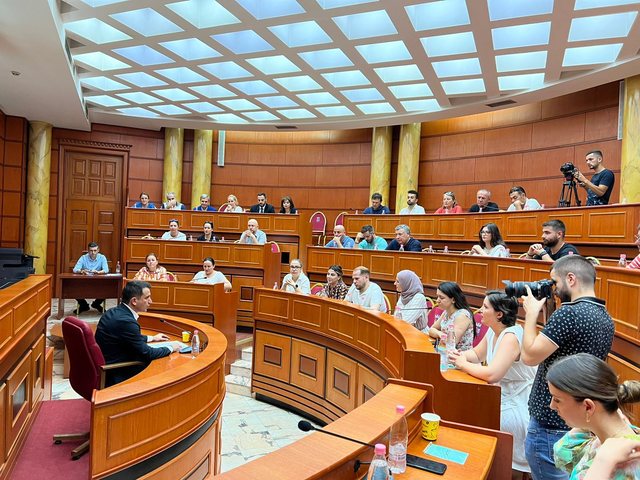 "With the decision we take today, we pass the last bureaucratic stage, the opening of the international competition, which lasts 60 days, and with the announcement of the winner, we will start the construction of the new Theater according to the Danish project of Bjarke Ingels. We will have the most modern theater in the Balkans! The year 2025 will find Tirana with a new theater, even though, just like with the project of the Great Ring in Astiri, the fight took us 3 years", emphasized Veliaj.

The mayor added that for the construction of the new National Theater, the necessary reflection in the budget has been made, as a result of the change in the prices of construction materials due to the war in Ukraine. "At the end of last year, we passed the project in the budget, but none of us expected that on February 24, Russia's aggression against Ukraine would begin, which would bring a turmoil in the markets, especially in the prices of iron and steel . As a basic element, the buildings have steel, iron and concrete, therefore it was impossible for us to open an international competition with the pre-war prices", explained Veliaj.

"I have apologized to some of those who still feel hurt about the theater, but I hope that with time - just like many of the people who protested at the Lake, now take their children to play there, or many of those who protested at Astiri, now they go home for two minutes from the Great Ring Road, or many of those who called asbestos and eternite a cultural monument to the "New Bazaar", today they spend part of the day shopping there, and many of them who cursed the towers, today they take them out on Instagram - so, over time this part will also join the modernization and they will understand that we did not destroy a cultural monument, but a sawdust building, which was debated for 30 years. I apologize if we hurt them, even for the way we messed it up, but it couldn't have been any other way. We had to do it at a moment when the leaders were snoring, because if we did it with all their militants there, we would go into a senseless confrontation and become the gas of the world. It was one of the most difficult decisions, but I believe that time will prove us right", underlined Veliaj.

He asked for the understanding of the citizens, as he emphasized that the new project will serve the next generation. "Some want the new project and some want the old project, without getting involved politically. My job, and yours as councillors, is to do what's best for the city, not what's best for the polls. I am not guided by how the next poll will turn out. I am guided by how the next generation will turn out and if we leave the next generation, that is, those who come after us, our children, a theater made of sawdust, where in the winter you go with blankets and in the summer with towels, especially at 40 degrees, this means that we have lost the chance of a generation to change this for the next 100 years", concluded Veliaj.