Three police officers are arrested in Vlora and Erseka 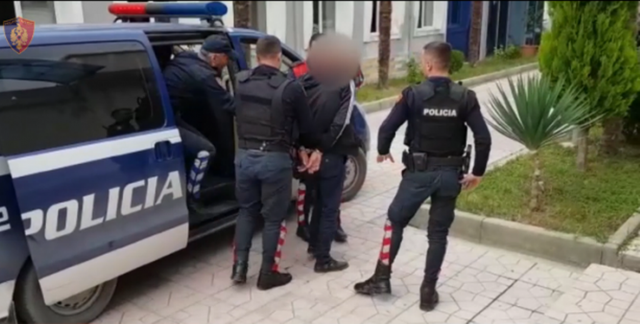 The Internal Affairs and Complaints Service has issued today the decision for the arrest of three police officers in Vlora and Erseka.

According to the announcement, the officer in Erseka was arrested after driving his vehicle, he had an accident with the perimeter wall of a house and the investigation revealed that the car was without the relevant documentation and the license plates belonged to a deregistered vehicle.

The CIA executed the criminal decision for 2 police officers in the Vlora Police Commissariat, after the Court had imposed the measure of personal security with a prohibitive character "Suspension of exercising a duty or public service" and "Prohibition of going abroad"

- 1 police officer was arrested in flagrante delicto at the Shtika Border Police Station, for "Irregular driving".

Vlora - CIA Regional Directorate Vlora-Gjirokastra in cooperation with the Prosecution at the Court of First Instance Vlora, has executed the criminal decision of the Court of First Instance Vlora for 2 police officers in the Vlora Police Station, in the framework of criminal proceedings, year 2021, for the criminal offenses of "Cultivation of narcotic plants" and "Abuse of duty" provided by Articles 284 and 248 of the Criminal Code.

• LD, on duty N / Specialist (SPZ) for Order at the Selenica Police Station of the Vlora Police Commissariat;

From the first investigative actions it resulted that the vehicle was without the relevant documentation and the license plates belonged to another unregistered vehicle. The vehicle was seized as material evidence. From the test performed with the Drager apparatus, police officer S.SH. has resulted in drunkenness. CIA Korça has referred the procedural materials to the Prosecution at the Court of First Instance Korça in charge of this police officer, for the criminal offense "Irregular driving", provided by Article 291 of the Criminal Code.

The CIA remains committed to its mission of ensuring law enforcement and invites citizens to report any cases of abuse or violation of the law by State Police employees by calling the green number.