"5 new schools in Lapraka", Veliaj introduces Ulsi Manja in Unit 11: New investments have increased the value of the property; Manja: Proud of the work done in Tirana 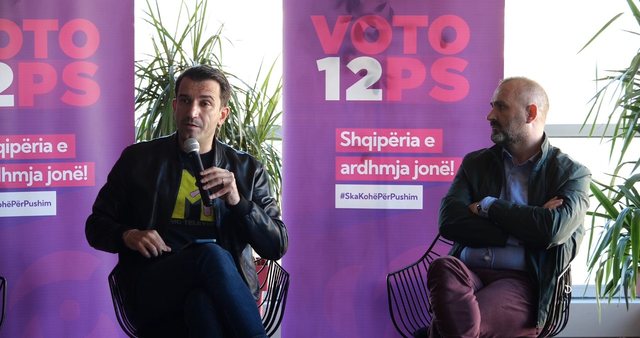 "Unit 11 in the capital is one of the units that has been transformed the most." This is what the mayor of Tirana, in the capacity of the political leader of the Socialist Party for the capital, Erion Veliaj, said as he introduced in a meeting with the residents of Lapraka, Ulsi Manja, the candidate for deputy in the April 25 elections, the sixth in the list of Tirana .

Manja said that he is proud of the work done in Tirana, while he promised Veliaj that in the next elections for the Municipality of Tirana, they will campaign for him, because very good work has been done in the capital.

"I am pleased to be by your side today, as the political leader of the Tirana Region, but also as the mayor of Tirana. And I have reason to be proud, because Lapraka is becoming day by day a very important node of development of the Municipality of Tirana. It is a construction site throughout the territory. And this is thanks to Erion's work as mayor. But Erion has said the continuation, and he says it again, he said even today that the good works that we have done and that we continue to do with the Municipality of Tirana are related to the central government ", explained Manja.

Among other things, MP Ulsi Manja answered the question whether there will be new schools in Lapraka. He said that 5 of them will be built with modern standards and the children of the area will be saved from teaching in two shifts.

"We are finishing and 5 new schools are ready in September. There are 2 schools in Kodër-Kamëz, ie in the Agricultural Institute, there is the school "Mother Teresa" and 'John Kennedy', and a new kindergarten with a capacity of 250 children, with all modern conditions. It is the school 'Andrea Stefani' that is ending at the roundabout of Shqiponja, and there are two other new schools, which we have border with Unit 9, but which will be accessed by both units together, is the school 'Kristo Frashëri' and ' Vaçe Zela '", Manja informed.

Veliaj and Manja explained that the Great Ring Road project will give a great development to the area, increasing the value of the property. The mayor said that the project envisages that all areas above the underpass will be turned into small parks with greenery and trees.

"Lapraka with the New Ring will turn into a new development pole, where real estate prices and the development of socio-economic life will be at comparable levels as with all other Units of Tirana, which are within the Ring of Small ", underlined Manja.

While Veliaj added, - “The initial project was a project where the roundabout was raised and created, let's say, a dividing wall, if we say visually, with both sides of the unit. Meanwhile the new project has taken the entire underground traffic junction. So not only will we not isolate it, so not only will there not be a wall separating the two sides of the road like buildings there, but all the surfaces above will be turned into parks, so that traffic will go down, and people will not to obstruct your eyes, but also to please your eyes with the parks that will be created in the four corners of the great intersection. ”