How many Albanians live in the US? Record figure in the region of Europe together with Bosnia and Herzegovina 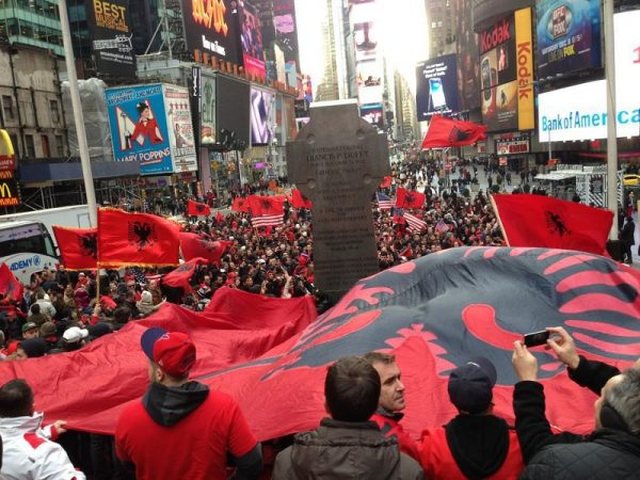 America is the dream of many Albanians who rush to the lottery every year to go to the land of opportunity.

About 91,000 Albanians lived in the United States by the end of 2018, according to statistics published by the Pew Research center, a US research institute that has published data on the foreign-born population living in the US.

From the region, the highest number of citizens living in the US belongs to Bosnia and Herzegovina, with about 107 thousand people. Albanians and Bosniaks result in the highest propensity to live in the US. The flow of people from Bosnia and Herzegovina was high in the period 1990-2000, due to conflicts with neighboring countries. While from Albania, the flight to the US continues at a high rate, ascertained by the high number of applications each year for the American Lottery.

Even in relation to the respective population, Bosnia and Herzegovina (32.3 thousand per 1 million inhabitants) and Albania (32 thousand per 1 million inhabitants) hold the record in Europe for the high number of citizens born in the respective countries, but living in the US, according to data processed by Monitor, followed by Iceland, Montenegro, Portugal, Macedonia, Greece.

In absolute value, the record is held by Poles, with 400 thousand people living in the US, followed by the British (340 thousand) and Italians (320 thousand), but in relation to the population, their weight is much lower (see graph ).

The U.S.-born population reached a record 44.8 million in 2018. Since 1965, when U.S. immigration laws replaced a national quota system, the number of immigrants living in the U.S. has more than quadrupled. Immigrants today make up 13.7% of the U.S. population, almost three times higher than (4.8%) in 1970.

Mexico is the country with the main origin of the immigrant population in the US In 2018, approximately 11.2 million immigrants living in the US were from this country, accounting for 25% of all US immigrants. The next largest groups of origin were those from China (6%), India (6%), Philippines (4%) and El Salvador (3%). (Albania accounts for 0.2% of the total.)

3-year-old girl who lost her whole family in the accident of Rruga e Kombit, is out of danger for life

The president in distress is looking for a camera, wherever he sees water he goes to find it

Niko Peleshi: Coping with floods was done with innovation, here is how specifically

Veliaj remembers FRESSH's birthday with a photo and a message

Lulzim Basha avoids Topalli's accusations for 2 villas as a gift from the oligarchs, does not show where he lives for rent today

Albania has been hit by the storm 'Filomena'. When will the weather improve?

The construction of palaces in Thumana starts today. Each apartment not less than 100 square meters

They tried to smuggle 21 kilograms of cannabis in Greece, two citizens were arrested in Korça

The court hearing for file 184 of Dibra is postponed

Do you feel happy or sad? Find out now!

Opening poll for the birthday of the unwanted queen Harry and Meghan in England. What do Albanians think?

Video / While recording nature live, a man in Brazil is struck by lightning

After the vaccine came out, this is the biggest problem the WHO has

'Kevin' responds to calls to remove Trump from 'Home Alone 2'

Snow up to 20 cm, in Korça moves with chains

Five reasons why we should be optimistic about 2021

Horoscope for January 15 by Russell Grant

Veliaj challenged him for schools, Basha is taken aback by the journalist's question: Tell me the name of a school you built from the ground up

What is the problem if Albania makes a contribution? Rama talks about his role in the Greece-Turkey issue

The Prime Minister talks about the dismissal of the sanitary worker of "Shefqet Ndroqi" and calls on the citizens to denounce: A sanitary worker does not reject the efforts of 18 thousand doctors

Flights with the UK resume, the conditions you must meet

The opposition only has me as a candidate for prime minister. We have field measurements that speak clearly

How was the vaccine transported from Rinas to Tirana? Prime Minister: No, we were bringing them on horses and putting them in tomato crates. I do not know how you can raise these doubts

Visit to Paris by writer Manuel Vilas during the pandemic

Fear in some American states, security measures are increased with the army on the streets

Problems for the WHO team, 2 experts banned from entering China, others two weeks quarantine

5 patients with Covid lose their lives, the number of infected goes to 660. Areas where new cases were discovered

Dangerous side effects of taking vitamin C in bulk

Trump has been blamed for the second time. What's next?

Coronavirus study: The consequences are felt even after a year

Who has a tattoo and it seems to him can not become part of the Police, the other rules that have been set

Oxygenist from Kavaja hospital arrested: Took 30 cylinders without authorization and distributed them around the house

7 behaviors that lead a couple towards separation

Do you feel happy or sad? Find out now!

Dangerous side effects of taking vitamin C in bulk

Opening poll for the birthday of the unwanted queen Harry and Meghan in England. What do Albanians think?

'Kevin' responds to calls to remove Trump from 'Home Alone 2'

Horoscope for January 15 by Russell Grant

Horoscope for January 14 by Russell Grant