Sanitation fraud at 'Shefqet Ndroqi', the prosecution launches investigations: The conversations were done physically and by WhatsApp 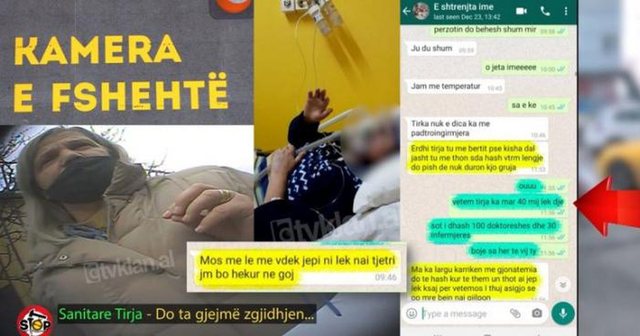 The Tirana Prosecutor's Office has officially launched an investigation into the case of Shefqet Ndroqi, a hospital nurse, who was removed as a nurse, constantly taking money from the daughter of a patient hospitalized with Covid, who asked her to stay close and distribute money. other doctors. After the death of the mother, the 30-year-old girl doubted the service that had been done and denounced the scandal on the show Stop in Klan. It was discovered that Tire Alldervishi was in fact not a nurse as introduced but a hospital nurse. The daughter Eltjana Sinanaj has given a total of 8 million ALL to the nurse for the care of her mother who stayed in the hospital for about 25 days and unfortunately lost the battle with Covid.

The prosecution says that the conversations between the girl and the toilet were carried out verbally and physically and through WhatsApp, where they are recorded.

Tire Alldervishi was arrested this morning, while last night the Ministry of Health demanded his immediate dismissal and asked the prosecution to handle the case.

The Prosecution at the Court of First Instance in Tirana will conduct a full and in-depth investigation to clarify whether we are facing a sporadic case or a genuine benefit scheme for medical staff or care at the expense of patients with COVID 19 disease without reluctant to bring to justice anyone who will be implicated, the Prosecution announces.

Full notification from the prosecution:

The Prosecution at the Court of First Instance Tirana has registered Ppnr.281 dated 13.01.2021 against the citizen Tire Alldervishi for committing the criminal offense of "Fraud" provided by Articles 143/2 of the Criminal Code

The citizen Eltjana Sinanaj, who has filed a criminal report against the citizen Tire Alldervishi, born on 15.03.1962, because according to her, she received some considerable sums of money to serve the mother of the complainant who was hospitalized with Covid 19 introduced as a nurse while she was a hospital nurse. Also in the show "Stop" dated 12.01.2021 were broadcast footage of the event.

On 28.11.2020, the complainant's mother was hospitalized at the University Hospital "Shefqet Ndroqi" after she tested positive for COVID 19 and passed away in the same hospital on 25.12.2020. A citizen dressed as a nurse appeared at the door and told her that she was a nurse at the "Shefqet Ndroqi" hospital. This citizen was Tire Alldervishi and later found out that she worked as a nurse in this hospital. From the first moment he asked for a sum of 2000 lek to give the phone to his mother, telling him that he was doing it for her even though he had never seen her before. He then tells her to wait for him in the bar. When he comes to the bar he told her, since other nurses are not allowed to come to the bar, she took over asking for the amount of money which was 10,000 for the doctor and 5,000 for the nurses and paramedics who removed the diaper. This amount continued every day and there have been few days that the complainant has given only 3000 lekë for the nurses and 5000 for the doctor and besides them she gave the list of medicines that she had to take from abroad. The complainant did not know if they were giving her the medicine or not because her mom had told her with messages that did not give her anything we brought them.

The citizen Tire Alldervishi was detained and the request of the Prosecution for the validation of the detention and the imposition of the security measure "prison arrest" was filed against her.

The Prosecution at the Court of First Instance in Tirana will conduct a full and in-depth investigation to clarify whether we are facing a sporadic case or a genuine benefit scheme for medical staff or care at the expense of patients with COVID 19 disease without reluctant to prosecute anyone who would be implicated.

Negative behaviors of any horoscope sign, Scorpio has the most inappropriate

What do the Chinese do differently from the rest of the world?

Veliaj ironizes Basha: I came by tram to Kavaja! It's back to the joke

"Po plasim!" Life and death in a Covid pavilion

Alexei Navalny is arrested as soon as he arrives in Russia

Fran Lebowitz's pain for the silent New York and a personal account of life, friends and politics

5 puzzles to get you thinking!

Ambassador Yuri Kim's weekend, from the walk in Skanderbeg Square, to the Chestnut Lake

Covid-19 figures in the country, stable: Over 470 new cases and 7 lives lost

Veliaj message to Basha: Forget it, as long as I am mayor! Forgive one of the villas you have, then come apply for the 5th villa!

Sokol Balla has become a father for the third time

It is not known how long the immunity lasts. Brataj talks about those who passed the virus but need to be vaccinated

Video / Rama at the engagement of the girl from Mamurrasi: I gave the first plum to my mother-in-law because it is a good sign

Lost four family members after the accident on Rruga e Kombit, the eldest son of the family: I still can not think clearly

The crossing on Gjegjan Street, Puka Municipality is suspended tomorrow: ARA had to intervene, but we do it ourselves

Veliaj: The SMI has suffered an earthquake in the party, while the PD has been covered by moral frustration

Anti-Covid measures tightened in Austria: Distance from another not more than one meter, blockade extended

Cameras and cards are obtained from Covid-2 Hospital. It is being investigated with whom the sanitary Tirja was related: She was not even from the ward

Careful! WhatsApp may have exposed phone numbers on Google

Kavaja will have drinking water 24 hours from summer, work with the water supply starts

Rama reacts but with the commentators: The complaint of the French embassy without relation to my position, there is no excuse to leave us out without the vaccine

From Chips to DNA change! The most prevalent theory on the net after the release of the anti-Covid vaccine and why it may not be true

I was on the show when I had an abortion: The British presenter confesses the most difficult moment to be and it is not

Veliaj: Ordinary Democrats warm themselves in the sun and Fatmir Mediu and Nard Ndoka become deputies

Adam Grant for The Economist: We can be much better psychologically with 6 hours of work, not 8

German Foreign Minister message to the first vaccinated: You can go to the cinema and theater

Rama: 369 doctors and nurses have been vaccinated in 6 days: We will increase the pace according to plan

Acarta day wardrobe according to Olivia Palermo from NY

Attempt to rob a phone shop in Fier, 3 perpetrators smash a police car

EBRD: Albania's recovery will depend on tourism, how it can benefit from the crisis

France with strong curfew against Covid: Starting at 18:00, fines from prison

From chains to tires to maneuvers! 7 tips on what to do when heading out on cold days

Cold Sunday! Read the weather forecast with temperatures before you leave the house

Covid is forgotten in the bar in the capital, Beqaj: The independence of breaking the law is offensive

Careful! Polar cold tomorrow in Albania: Tirana -5 degrees, how much will the temperature decrease in other cities

Negative behaviors of any horoscope sign, Scorpio has the most inappropriate

Horoscope for January 16 by Russell Grant