Archbishop Janullatos recovers from Covid, message after discharge from hospital: It was a severe ordeal, I will continue treatment at home 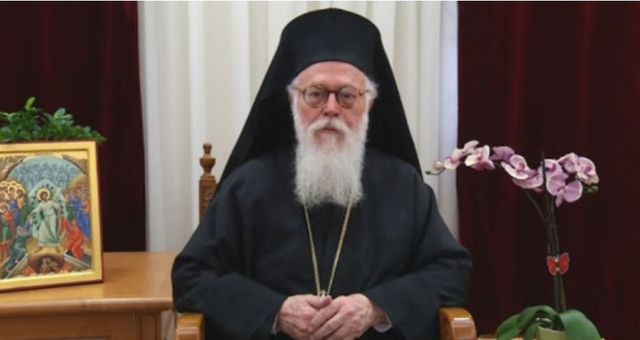 Archbishop Anastasios Janullatos sends the first message to his faithful and supporters after recovering from Covid, as he was released today from the hospital in Athens, where he was treated for 12 days.

In a Facebook post, the Autocephalous Orthodox Church of Albania announces that now, he will continue the necessary medical treatment at home, in Athens.

Praising God for the progress of this ordeal, the Archbishop expresses his gratitude to the doctors and nurses of the Intensive Care Unit, under the direction of Professor Mrs. Anastasia Kotanidhu.

His Beatitude thanks from the bottom of his heart for the very precious fraternal congratulations His Holiness, the Ecumenical Patriarch, Mr. Vartholome; Their fortunes, the patriarchs of Alexandria, Mr. Theodore; of Antioch, Mr. Joan; of Jerusalem, Mr. Theophilus; of Moscow, Mr. Kirill; Their Beatitudes, the Archbishop of Cyprus; z. Chrysostom and Athens, Mr. Jerome, as well as many other expensive hierarchs. The Archbishop warmly thanks His Grace Bujar Spahiu, President of the Muslim Community, the Bektashi Grandfather, Haxhi Dede Edmond Brahimaj, the Metropolitan Archbishop of Shkodra, Mons. Angelo Masafra.

He expresses warm thanks for the warm support of their Excellencies, for the President of the Republic of Albania, Mr. Ilir Meta; for the Prime Minister, Mr. Edi Rama; for the President of the Hellenic Republic, Mrs. Ekaterini Sakelaropulu; The Prime Minister, Mr. Kiriako Mitsotakis; for the former presidents of the Hellenic Republic, Mr. Prokopi Pavlopoulos and Mr. Kristo Sarcetakis; for the chairman of the Parliamentary Opposition, Mr. Alexi Tsipras; for the former Prime Minister, Mr. Andonis Samaras; for the ministers Mr. Niko Dendias and Miltiadhis Varvitsiotis; for Mr. Miki Theodhoraki, for the Speaker of the Assembly of Albania, Mr. Gramoz Ruçi; for the Mayor of Tirana, Mr. Erion Veliaj; for the chairman of PBDNJ, Mr. Vangjel Dule; for Albanian and Greek journalists.

He also thanks with all his heart the countless friends, clergy and laity, known and unknown, who supported him with heartfelt prayers and spontaneous expressions of their love during this time.

Silent participation in the suffering of God's people helps mystically to achieve social cohesion. Spontaneous sincere love always empowers people in difficult moments. Love is the most precious thing that can exist in the world. From the Secretariat of the Holy Synod Tirana, November 23, 2020.