Missing for 4 days, mother tells the last conversation with her son: Friends cut her off 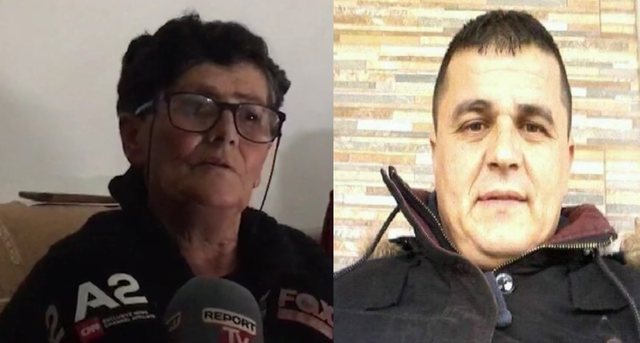 Ermal Ngucaj, 40 years old, from Lepenica, Vlora, has lost contact with his family for 4 days.

Fejzo and Mjaftime Ngucaj suspect that their son has been abducted and ask the Vlora police to start the search for their son Ermal Ngucaj.

"The boy does not answer the phone. We sat on thorns, I ask the woman where the boy is and I ask her if you spoke. He tells me that I have been talking since Monday night and I do not know where he is. That day I stayed and in the evening I went to Vlora because he was not at home.

I went, opened the door was not. I went and asked the police if they had caught him for confusing the streets. Police said we did not arrest him. I came upstairs. The groom told me I would report it. A boy told me that Ermal's car is at the turn that goes to Mavrovo. I went, the car was tidy, his clothes inside. Even the athletes inside.

The phone has been locked since Monday night. I want the boy, to find the boy, to introduce the state to check in detail that the boy may have been harmed. "They kidnapped him, took his car and took him there to remove the traces," he said.

Mjaftime Ngucaj shows the last conversation on the phone with the boy and says that he has been waiting for him at the gate for 4 nights. I talked to my son when I was in Italy, I told him "Ermali, how are you, he told me well". I told him on Monday I will come and on Tuesday we will go to Vlora, you will come to pick us up, "okay, I will come, I am looking forward to coming as soon as possible".

We came to Vlora, we did not have an offer over the phone. When we came from Italy, he said to his father "when will you come to wait impatiently". That day the boy did not speak, he burned something for us, my husband says "Ermali has something", I told him maybe he is asleep. The little maid spoke to us, and said we do not know where she is. We got the bride on the phone, she tells me I tried the phone too.

The boy had no problem. I stayed in Italy for 7 months. Now for 4 days I have not heard his voice. I love the boy, from his friends who have eaten him in treachery, taken him hostage or injured him. We wait to look out the gate for the only son. I also have a son who died, he is the second one to leave me, I love the boy because he does not do it at home, whatever it is, I can not afford it. "The state is trying, everyone is on the move," she told Abc News.

Another attack in France, police kill the perpetrator

Someone illustrated with drawings the strange dreams he saw

Lies and conspiracy theories hinder the fight against the virus!

'Too much pain for the miners who lost their lives'. Olta Xhaçka writes after the tragedy in the mine of Dibra

Rama again calls on oil workers in Ballsh: Shut up the strike, do not be fooled by crocodiles crying for you

The second round of group matches culminates with Sociedad-Napoli, on the field also Milan and Roma

Topalli, the last act of a debauched right

Manastirliu talks about Covid-19 situation: We will increase hospital capacities, pandemic is not political football

Before each show Alessia Marcuzzi does the test and shows life with suspicion, positive or negative?

Reconstruction after the earthquake, Ahmetaj reply to Walter: Field work is not without surprises, the project is unique

'Give up forming the government, or you will be killed.' Dritan Abazovic is threatened with death

If you use the Menstrual Cycle Application, someone is selling your data. The true story of a girl

Minister Kushi gives the good news for psycho-social workers: There will be a doubling of the number, here are the criteria you must meet

Warnings for tough times, EU commission: This is when the vaccine can be released

After 48 hours, two workers and an engineer were pulled out of the Dibra mine dead

Warm day and today. Temperatures up to 22 degrees

Horoscope for October 29 by Russell Grant

The engineer and two miners lose contact with the families, it is suspected that they are trapped in the gallery

Jumped from the 7th floor of the palace, the 40-year-old dies

What causes cellulite and how can you treat it?

Jozefina Topalli presents the new political movement with 'The Three'

France and Germany were closed by Covid. Is Albania in danger?

Daily news! France in national isolation from Friday. Schools will not be closed. McAllister Concerned About Electoral Code. The dangerous message on WhatsApp that is appearing to Albanians

Changes in the Electoral Code, 8 MEPs Rama letter: Wait for the opinion of Venice

The movie Rebecca, where the costumes remind us that we have to go back to the 30s

Cartoons raising a veiled woman's dress! Erdogan does not leave it at that

'This is war', politicians in Poland protest in parliament over anti-abortion law

Agron Llakaj confesses recovery from Covid after 20 days with his wife and finally; two words for everyone

Dr. Harxhi: The protocol should be reviewed, there is an overload with antibiotics of patients with Covid

Someone illustrated with drawings the strange dreams he saw

Before each show Alessia Marcuzzi does the test and shows life with suspicion, positive or negative?

If you use the Menstrual Cycle Application, someone is selling your data. The true story of a girl

Horoscope for October 29 by Russell Grant

Mercury returns to Libra (because it has forgotten something), but how does this affect each sign?

If you want unconditional love, marry one of these 5 signs