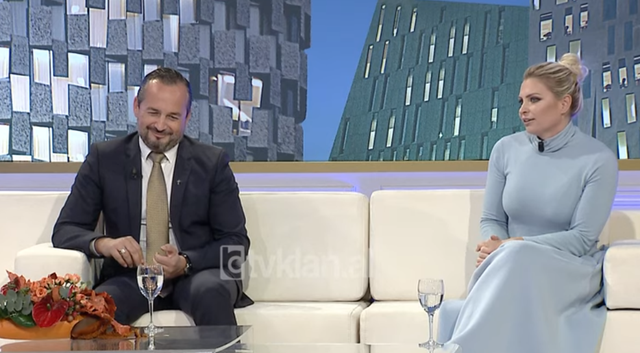 Pope Francis declared that homosexuals have the right to start families, as children of God, not unlike others! His proposal for a law on civil union, not marriage, became the headline of the world media.

How was this news received in Albania? In Rudina's show this afternoon, several characters were invited: Klodiana Shala, Elton Ilirjani, Xheni from the LGBTI community and Pastor Akil Pano who expressed their views.

Klodiana Shala said that she is personally for the traditional model: Mother and Father! She also took the case in Canada, where to get a Canadian passport you have to be gay.

Klodiana Shala: when the Pope says who I am to judge and who we are, I am actually traditional that the child should have a father and a mother but this part I think the pope is a little more realistic and seeing the world that these communities are invaded us said why not give you the right? If we want to get Canadian documents we have to be either gay or ... to get documents automatically we Albanians. There are no conspiracies is true.

Elton Ilirjani said that he is not exalted by the Pope's statements: I, too, like the Pope, have changed, wise people change because only an empty head persists. The more he is helping us the more he is helping the Church, I am not too exalted but I consider it something historic to give the message that we are equal, that God loves us. I go further by saying that no one is straight, that we all have female and male hormones and it depends on the circumstances, in Albania the circumstances are that it is a shame to have sex, imagine how far we are with the mentality.

Klodiana Shala replies saying: It is a shame to say it on TV. I have many gay friends, I have never judged them, but I can not say that I am bad because I can not be… We have accepted these as they are and these should accept us with these thoughts.

Akil Pano: This is how we put it, every being has its own rights, which are protected by the Constitution. It is news that the Church has historically remained stoic in the dogmatization of the doctrine, which has been constitutionalized for 2000 thousand years. There are no bonds that God blesses, between two men and two women. The statement that the Pope made in 2013 is something else entirely, it is against such a civil relationship, between two men entering into marriage. Within the Church there are two lines.

Took them to court for defamation, PD reports to SPAK Minister Olta Xhaçka

German Foreign Minister thanks Albania for chairing OSCE: We will support your work wherever we can

Altin Basha, the new director of the Experimental Theater

Dr. Koraqi: What test is needed before the vaccine? Those who have antibodies can do it in a second

What will the weather be like on the weekend? Meteorology Bani shows when rain is forecast throughout the country

Will the PCR test be replaced by the fast Antigen test?

Vaccination starts in England on Tuesday

Photo / Another street of Tirana is being transformed

Pajama models to be combined as a family for the holidays

Where does the rapid test differ from PCR? Silva Bino shows when it should be done and how accurate it is

The rapid antigen testing in Tirana starts on Monday

Justin Bieber: I want a lot of kids, but Hailey's body and she decides

He was sent to Turkey for treatment. Covid takes the life of the former mayor of Elbasan

Masks or acne caused by masks

Draw: These are the new members of the Judicial Appointments Council

Covid / Fatmir Mediu complains to the Constitutional Court about the ban on political activities: We must start meetings

# Korçamakerspace in function of the heritage & cultural tourism of a destination

Mc.Donalds year-end ad reminds us all to keep the baby alive inside

Playing video games is not as harmful as it seems

Leading epidemiologist in Sweden: Why mass immunity to coronavirus is still a mystery

100 days! Joe Biden's first request for president for Americans is related to masks!

Video / As in scary movies, a girl recorded herself dancing when a man enters her room from the balcony

The instruction on the fees paid to the notary changes. These are the new services for the Cadastre Agency

A warning to parents! What's wrong to teach your kids Peppa Pig and Frozen Elsa

Prime Minister Johnson said that thanks to the vaccine in the summer there will be weddings, but did not clarify whether one of them will be his wedding

Horoscope for December 4 by Russell Grant

Halim Kosova's unusual story about the door where the PD fell: I was fired because I was not aggressive and did not insult the SP

The first doses of Pfizer vaccine arrive in Britain: The place where they will be kept is not revealed

Four areas on the outskirts of Tirana with blackouts tomorrow

'Venice' report on coalitions neither virgins nor de-virgins the issue

What are the problematic cities with order in Albania

Chief Prosecutor Çela said that Elbasan is being controlled by gangs, Lleshaj: The city is under the control of the authorities

The vaccine is expected to arrive in Albania in the first weeks of January. European governments are being asked to lift some restrictions. Historic for Albania, the big European final will be held in 'Air Albania'

Who fines the Greek Prime Minister for violating anti-Covid rules?

Basha status after Rama: He does not work to save people's lives, but finds time to deal with memes

WHO: The virus is not gone and it will not go away! Cases are on the rise in the Balkans

Pajama models to be combined as a family for the holidays

A historic decision for Albania! The final of the "Conference League" will be held at "Air Albania"

Berisha in poor condition from COVID-19, the guard is hospitalized

Hysaj wins the battle with COVID-19, ready for the challenge against AZ Alkmaar

Justin Bieber: I want a lot of kids, but Hailey's body and she decides

George Clooney: When I found out we were going to be twins, I froze for 10 minutes

Horoscope for December 4 by Russell Grant

Horoscope for December 3 by Russell Grant